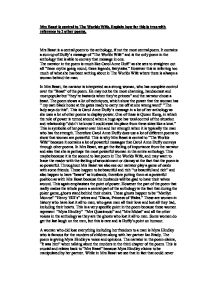 Mrs Beast is central to The Worlds Wife. Explain how far this is true with reference to 2 other poems. Mrs Beast is a central poem to the anthology, if not the most central poem. It contains a sum up of Duffy's message of "The Worlds Wife" and is the only poem in the anthology that is able to convey that message in one. The narrator in the poem is much like Carol Anne Duff" as she sets to straighten out all "these myths going round, these legends, fairytales." However this is referring too much of what she has been writing about in The Worlds Wife where there is always a woman behind the man. In Mrs Beast, the narrator is interpreted as a strong woman, who has complete control over the "Beast" of the poem. He may not be the most charming, handsomest and most popular but "they're bastards when they're princes" and the narrator chose a beast. The poem shows a lot of techniques, which show the power that the woman has " my own black horse at the gates ready to carry me off at one wrong word" "The lady says do this". ...read more.

While in Mrs Beast we see that in fact that could never happen to that narrator because she is in full control of the relationship. In the first chapter of "The Devils Wife" we see the relationship progress. Myra liked Brady for his charm and bad boy attitude. In comparison to "Mrs Beast" the narrator went for a man that she could get and need not have worked for. Myra had to be "insolent, dumb" "scowled, pouted and sneered" to grab Brady's attention. In "Mrs Beast" the beast was happy to do the chasing and begging because he is a beast compared to his beautiful wife and is happy to have her. "What you need is a beast" is the advice that Mrs Beast gives to the reader. The girls she raises her glass too, are the women like Myra, who chase after guys and give them everything. Myra ended up imprisoned for life because Brady manipulated her into murdering children. She was so in love, it blinded her "I swooned in my soul." We can tell that she wouldn't have done this if she had not have met Brady "he made me bury a doll." ...read more.

This could be to show that Duffy thinks that men are only after s*x and women feel inclined to give it to them. Therefore it becomes an essential part of a relationship. In Anne Hathaway the s*x is more romantic than any other poem, making it an outcast in the anthology. The poem also praises men, which it doesn't in any other poem in the book and makes them seem like intelligent and empowered. Yet this is what makes it different to the anthology. Mrs Beast really is an important poem to the anthology. It shows, tells, and represents every other poem in the anthology and sums them all up as one. It backs up other poems and is a very smart move to place at the end of the anthology, as it will really open peoples eyes to the reality of what happened to Marilyn Monroe, and Diana. They gave their hearts and ended up and ghosts known for their tragic endings in love. Nearly all of them died, which is emphasised as they "stood a line of ghosts" behind women who can control their men and have never had men make fools of them. At the end of the poem it is very symbolic. She is in control of the relationship for the sake of all the women who gave it their all and lost. ...read more.