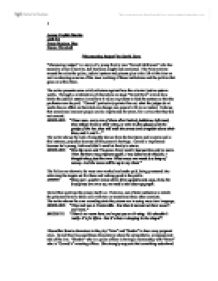 Access English Studies Unit 4 b Prose-Modern Play Emma Marshall "Murmuring Judges" by David Hare "Murmuring Judges" is a story of a young family man "Gerard McKinnon" who has turned to crime to survive, but has been caught and convicted. The Play revolves around the roles the police, judicial system and prisons play in his life at this time as well as showing us some of the inner working of these institutions and the politics that goes on within them. The writer presents some valid criticisms against how the criminal justice system works. Through a combination of characters on stage "David Hare" reveals how brittle the judicial system is and how it relies on prisons to feed the system so that the profession can be paid. "Gerard" particularly points this out, what the judges do at works has no effect on them but can change one person's life in an instant. It shows that sometimes innocent people can be imprisoned for years, for a crime that they did not commit. GERRARD: "These men, every one of them silver haired, judicious, informed, they will go home to their wives, to wine in fine glasses and the gossip of the bar, they will walk the streets and complain about their lives, and I. ...read more.

BARRY: "Oh, leave it out, Sandra, you're not just out of Hendon..." This is a patronising reply and throughout the play you can see the sexist remarks and inner politics of the Police force. "Irina" is also discriminated because of her sex in the Judiciary system but also she is just out of University and quite idealistic about how she believes things should work. The character "Sir Peter" is shown in a very sexist light and you get the impression that he does not take her seriously as a lawyer because of her sex. He feels it is her duty to accompany him to functions in which they will be seen together, which will reflect good on him as not only is she a woman but black as well. This not only shows the chauvinistic side of the Judiciary system but also a deeply bigoted side. "Irina" feels uncomfortable with being told what to do in her private time but is underhandedly threatened "Woody" who is "Sir Peter's" aid. WOODY: "The last new girl we had here. Very bright. From Harvard... She said no... But look at it the other way. Where is she now?" In some ways I find Hare's use of these characters in the play as quite chauvinistic on his behalf as why is it the women have to be the compassionate sensitive people in the play, and the men are all seen as hard faced with no conscience. ...read more.

BARRY: "Do you? From what? From your experience? From your deep experience of doing a filthy, thankless job? You really know? Oh, do you? When was the last time anyone was sick on your shoes?" The portrayal of the prison shows the lack of funding available, plus the feeling of the lack of interest shown in the service. It suggests that the authorities don't care about the standards and once they have been sentenced and in prison, all is then forgotten, they are history. There is a violent scene in which "Gerard" is assaulted in the showers so he will keep quiet, it is believed this 'message' has come from "Barry" to remind him who is in control and that he should just keep his head down and do his time. The fact that this can happen shows the out of control behaviour of the prison as a whole. Even where there are opportunities for the prisoners to better themselves they can not continue to better themselves for long. GERARD: "I tried to take a course, you know. There's a bookbinding course. I thought, that's interesting work. It takes four weeks. You learn how to do it. But then you can't practice until you get out. I thought, yeah, that's it: they give you something, and then take it away. ...read more.