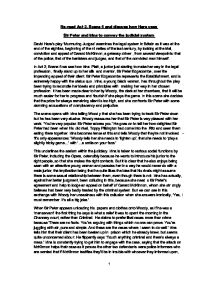 Re-read Act 2, Scene 5 and discuss how Hare uses Sir Peter and Irina to convey the judicial system David Hare's play 'Murmuring Judges' examines the legal system in Britain as it was at the end of the eighties, beginning of the nineties of the last century, by looking at the trial, conviction and appeal of Gerard McKinnon, a getaway driver, from several viewpoints: that of the police, that of the barristers and judges, and that of the convicted man himself. In Act 2, Scene 5 we see how Irina Platt, a junior just starting to make her way in the legal profession, finally stand up to her silk and mentor, Sir Peter Edgecombe, over the impending appeal of their client. Sir Peter Edgecombe represents the Establishment, and is extremely happy with the status quo. Irina, a young black woman, has throughout the play been trying to reconcile her ideals and principles with making her way in her chosen profession. It has been made clear to her by Woody, the clerk at her chambers, that it will be much easier for her to progress and flourish if she plays the game. In this scene she decides that the price for always remaining silent is too high, and she confronts Sir Peter with some damning accusations of complacency and prejudice. The scene opens with Irina telling Woody that she has been trying to track Sir Peter down but he has been very elusive. ...read more.

He says, patronisingly 'Irina, you have been my dinner date. You simply cannot be this na�ve.' He goes on to tell her that the police will simply close ranks, that a better name than police force would be police club, because that's what it is. The implication being that as a member of this 'club' your first loyalty is to your fellow members, rather than to any idea of 'justice.' This shows Sir Peter's cynicism. He explodes when Irina talks about what's right but seems to view the idea of an essentially corrupt police force with equanimity. At this point in the scene Irina, who has always been courteous and even deferential to Sir Peter, raises her voice and accuses him of not believing Gerard's account of what happened. He freely admits that he doesn't, as 'he's fighting for his life,' and so will do what he must, and say anything that will help his own case, 'then find someone who'll swallow it whole.' He is implying that Irina has been manipulated by her client. He underlines the wealth of his own experience by telling Irina that he has 'represented dozens of people like him.' We see Irina's anger increase when she sees how Sir Peter doesn't view his criminal clients as individuals but as a 'type' - which he defines as 'an ordinary, slightly sub-average human being who had landed himself in a d**n stupid mess.' He smiles at her outrage at this immensely patronising and snobbish evaluation as for him this is just so much enjoyable sparring, but Irina refuses to ...read more.

Irina's race and gender mean she is not part of the old boy's club to which most barristers and judges seem to be a part of. So she can look at them with objectivity. She has been prepared to try and blend in, to play by the rules, but in this scene she can bear it no more and challenges the lazy orthodoxies that Sir Peter tries to defend. He in his turn finds her idealism hopelessly na�ve. He is not a completely appalling character: we can see that he is genuinely fond of his pupil, and he has never made any s****l advances towards her, he just enjoys his colleagues assuming that he has. Hare is too subtle a writer to make him corrupt. Sir Peter does not need to break the rules, as he does very well by them: it is the system itself that is flawed. As Irina makes clear, civil cases, such as libel, pay massively better than criminal ones, so it pays the barristers to prepare well and at length. The rewards being not so great, in spite of Sir Peter's protestations, criminal clients are not as well represented. Irina shows her integrity when she risks losing Sir Peter's favour and patronage by standing up to him and challenging his attitudes. She has been silent long enough and now she must speak out. This is a powerful scene because we see a strong and intelligent woman stand up for the underdog from within a profession where, Hare suggests, complacency and privilege seem to be still very much the norm. ?? ?? ?? ?? 3 1 ...read more.