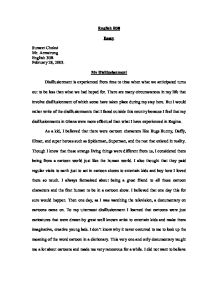 English B30 Essay Sumeet Choksi Mr. Armstrong English 30B February 28, 2003. My Disillusionment Disillusionment is experienced from time to time when what we anticipated turns out to be less than what we had hoped for. There are many circumstances in my life that involve disillusionment of which some have taken place during my stay here. But I would rather write of the disillusionments that I faced outside this country because I feel that my disillusionments in Ghana were more effectual than what I have experienced in Regina. As a kid, I believed that there were cartoon characters like Bugs Bunny, Daffy, Elmer, and super heroes such as Spiderman, Superman, and the rest that existed in reality. ...read more.

This very one and only documentary taught me a lot about cartoons and made me very rancorous for a while. I did not want to believe the fact that all I was watching were just caricatures drawn by well known artists. All this I saw as a kid. I wish I got to know this as a teenager so that I would not be as bitter as how I felt after knowing the truth of cartoons. However, this sullenness did not last long. Still as a kid, I was again faced with disillusionment. Most of my disenchantments occurred when I was a kid, and I feel this was the only time when I felt more grief than as an adult. ...read more.

They said no but because you have been a good boy he gave you this present. I was so delighted that day. Very next day to my disillusionment I found out the truth. I overheard my father asking my mom from where she got the helicopter and how much it costs. I left the scene after hearing this. I was unhappy because my parents lied to me. They spoke so many lies concerning this issue. I then decided not believe that any of this happened. I thought of this many times until finally I thought no more of it. Later on I found out from my friends that their parents did the same to them and gave the same reason as my parents gave me. These were two very effective disillusionments in my life. There are many others but your word limit is restricting me from writing more. ...read more.