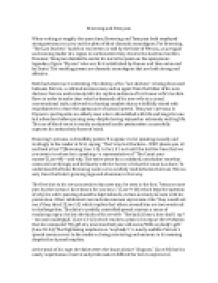 &quot;My Last Duchess&quot; and &quot;Ulysses&quot;. Browning and Tennyson both employed strong personas to carry out the plots of their dramatic monologues.

Ã¯Â»Â¿Browning and Tennyson When writing at roughly the same time, Browning and Tennyson both employed strong personas to carry out the plots of their dramatic monologues. For Browning, â€œThe Last Duchessâ€ based on real events is told by the Duke of Ferrara, an arrogant and cunning leader of a region in northeastern Italy close to the Austrian borders. However, Tennyson decided to center his narrative poem on the eponymous legendary figure â€œUlyssesâ€ who was first established by Homer and then enhanced by Dante. The resulting poems are dramatic monologues that are both strong and effective. Both backstories are interesting. The destiny of his "last duchessâ€ is being discussed between Ferrara, a cold and envious man, and an agent from the father of his new duchess. Ferrara meticulously tells his captive audience of his former wife's terrible flaws in order to make clear what he demands of his new wife in a casual, conversational style, achieved via rhyming couplets that are skillfully mixed with enjambment to create the appearance of natural speech. Tennyson's persona in Ulysses is portrayed as an elderly man who is dissatisfied with life and longs for one last adventure before passing away despite having enjoyed an extremely exciting life. ...read more.

Instead, he "commands,"(Line 45) and then "all grins stopped together." (Line 46) In other words, the duke got rid of his wife, and this is the whole point of the monologue: to subtly warn the next wife about the kinds of behaviors he thinks are appropriate for a wife and what will happen if his wishes are not followed. The duke emphasizes his confidence by deftly shifting the focus of his audience from one object of art to another one of his valuables, this time a priceless bronze. In actuality, Browning uses dramatic monologue to craft a very realistic portrait of a figure who is very enigmatic. He shows the inner workings of a character's psyche, his values, likes, and motivations by fusing the lyric and dramatic forms. The dramatic irony, of course, is that although the duke attempts to leave his listener with an absolutely positive picture of himself and an entirely negative impression of his previous duchess, Browning really succeeds in leaving the reader with the exact opposite impression. The mythical Ulysses, the protagonist of Tennyson's dramatic monologue, is a slightly more sympathetic character, but he is nonetheless self-centered. He talks somberly to his wife and kid after returning from his epic adventures in Ithaca, lamenting his present inaction among "the silent hearth"(Tennyson Line 2) and the "barren crags" (Line 2) ...read more.

where they can reunite with legendary figures like Achilles, whom the gods transposed there and gave immortality. Perhaps there is uncertainty in Ulysses about what the future holds, and such concepts can elevate the poem to elegiac heights. Tennyson allowed himself this license by drawing from both Homer and Dante as well as his own morose state of mind due to the tragic loss of his friend. Reflections on death would be natural in any elderly person and by making Ulysses an old man, Tennysonâ€™s dramatic monologue is all the more convincing and effective. It also makes the reader re-appraise the heroâ€™s motivations and sympathies with his insatiable restlessness and yearning to discover something, which is beyond the utmost bound of human thought. Both poets employ the dramatic monologue style to delve into the true motivations of two extraordinary, legendary figures. Both are driven at least in part by self-interest, while one uses his position to further his own merciless purposes and the other explores a more noble impulse. Lord Tennyson, Alfred. â€œUlyssesâ€ The Victorian Age, tenth ed., W.W. Norton & Company, New York, NY, 2018, pp. 156-158 Browning, Robert. â€œThe Last Duchessâ€ The Victorian Age, tenth ed., W.W. Norton & Company, New York, NY, 2018, pp. 328-329 ...read more.