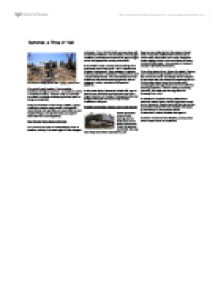 My news feature article. Summer of h**l. Those weather conditions during this summer - so called the worst in Australian history - havent made us surrender but made us stronger and display the true spirit of being an Australian.

Summer, a Time of h**l Wrecked: in Tully Heads after raging cyclone Yasi We weren't easily beaten. Those weather conditions during this summer - so called the worst in Australian history - haven't made us surrender but made us stronger and display the true spirit of being an Australian. Being an Australian mean being a battler, a good mate and a nature-loving person. Through the recent floods and cyclones, we have stood up and fought strongly. During this event, we support each other like a one big family. How the dry turns damp and nasty Our summer has been an extraordinary show of weather, unlikely to be seen again. It has changed us forever. From QLD to Perth, we have been left bruised and battered - but not beaten. The deluges unofficially heralded the end of the El Nino drought which had gripped the country since 2000. It all started in early January with pounding rains and floods-which went up to 7.8m in Central and Western Queensland. ...read more.

On the other hand, Anne Smart, cries while surveying the damage done to her home after the flooding in Ipswich. "There's nothing I could do," she said, "the water was coming down the driveway like a river." In addition to residents having suffered from personal losses, there is also a significant impact on our economy. People have lost their jobs as the businesses recover from the disaster. It is tipped to cost about 3.5 billion dollars to the Queensland's natural disaster damage bill. But even in such horrible situation, we truly show what it means to be an Australian. United to help - The uninvited guests visits Let's think in a positive way. These disasters bring out more of our Australian character traits than we realise. People were united to help those whose homes were flattened by the torrential rain. They even went in and gave a hand to those whom they didn't know or talk to before. Everybody works together for a massive clean-up while enjoying each other company. ...read more.

I believe this is a heart-warming representation of an Australian. This conveys that not only we care for each other, we also put our hearts and souls into protecting our wildlife. "Don't care if it is the biggest, we can still overcome this like we did before..." So it would seem that being a 'true blue' Australian means being community-minded and helping others out when in need, no matter what. After all these dreadful devastation, there's one thing that is clear in everyone's minds - And it is about the Australian spirit. We all know that these natural disasters are nothing new as it has been part of our history since the dawn of time and had affected many people in the past. But every time, we Australians have coped and endured. We've overcame recent cyclones and floods, which may seem like the worst in our history but it could be worse. We should be proud of the way we come together to face the great devastation head on. Well, at least I am proud to be able to call myself an Australian. ?? ?? ?? ?? ...read more.