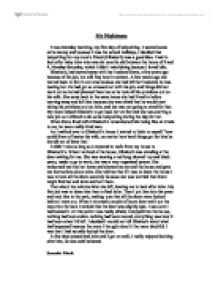 My Nightmare It was Monday morning, my first day of babysitting. I wanted some extra money and because it was the school holidays, I decided that babysitting for my mum's friend (Elizabeth) was a good idea. I had to look after baby John who was six months old between the hours of 9 and 4, Monday-Saturday, which I didn't mind doing because I loved kids. Elizabeth, had moved away with her husband Steve, a few years ago because of his job, but still they kept in contact. A few weeks ago she moved back to live in our area because she had left her husband, he was beating her. He had got so stressed out with his job, and things did not work out as he had planned them too so he took all his problems out on his wife. She came back to the same house she had lived in before moving away and left him because she was afraid that he would start taking his problems out on John, and she was not going to stand for that. ...read more.

I decided I would not tell Elizabeth about what had happened because the more I thought about it the more doubtful I was that I had actually locked the door. A few days passed and John and I got on well, I really enjoyed looking after him, he was well behaved. Elizabeth always came home at 4.30 but this particular day she rang me at 3.30 asking me if I would stay a few more hours because she wanted to go out with a few friends from work. She said she would be back around 9. At 6.30 after feeding John I put him to bed. I then watched television for a bit. As I was doing so I heard a noise. It sounded like someone tapping on the window. I ignored it. The tapping got louder and louder. Then as soon as I switched the television off the noise stopped. I couldn't understand it, first the door and now this. I went to check on John, he was fine. I went back downstairs; the front door was wide open. ...read more.

I was shaking with John in my arms. Then I heard the front door open. Elizabeth was home. She ran upstairs to me, because she could hear screams from outside and she held me in her arms. I was so afraid that Steve was going to kill John and I. Elizabeth calmed me down, and then she rang the police. They came over to the house and I had to give them a statement, giving them my version of events. They said that what I had told them made sense and that there was no need for any further investigation on Steve's death because it was obvious from the scene what had actually happened. I am now still babysitting for Elizabeth and we get on really well, John is now three and is such a well-behaved little boy. I don't look after him during school hours, but I do sometimes after school, and at the weekends, also in the school holidays. I really enjoy it. We don't talk about Steve anymore or about what happened. We have just let it become a thing of the past and have gotten on with our lives. Samantha Wharfe ...read more.