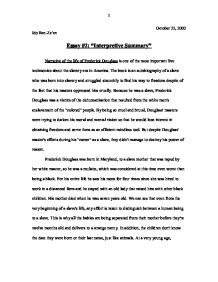 Narrative of the life of Frederick Douglass is one of the most important live testimonies about the slavery era in America.

October 22, 2003 Ido Ben-Ze'ev Essay #2: "Interpretive Summary" Narrative of the life of Frederick Douglass is one of the most important live testimonies about the slavery era in America. The book is an autobiography of a slave who was born into slavery and struggled staunchly to find his way to freedom despite of the fact that his masters oppressed him cruelly. Because he was a slave, Frederick Douglass was a victim of the dehumanization that resulted from the white men's enslavement of the "colored" people. By being so cruel and brutal, Douglass' masters were trying to darken his moral and mental vision so that he would lose interest in obtaining freedom and serve them as an efficient mindless tool. But despite Douglass' master's efforts during his "career" as a slave, they didn't manage to destroy his power of reason. Frederick Douglass was born in Maryland, to a slave mother that was raped by her white master, so he was a mulatto, which was considered at this time even worst than being a black. For his entire life he saw his mom for four times since she was hired to work in a distanced farm and he stayed with an old lady that raised him with other black children. ...read more.

so any slave who would be caught with tar on his hands will be punished severely. In a different case, the colonel questioned a young slave he owned about the conditions working for the colonel, when the slave didn't recognize the colonel's face. The poor slave told him that he's been treated badly by his owner so the colonel sold this slave immediately to a Georgia trader and he was separated from his family and all his friends. When you're considered as calf, no one cares if you have family or friends. Douglass himself knew miserable childhood as well. Growing up in the plantation, he got the same treatment as his slaves brothers. Sleeping with no bed or blanket, hanging around without trousers and being hungry wasn't something unfamiliar to him and when he moved to Baltimore, to live under urban conditions he was pretty pleased. There Douglass started to learn how to read English. Initially, his mistress helped him and gave him lessons, but when his master discovered this, he raged and forbade her of teaching him. Douglass at this time was old enough to realize that actually, by the way of preventing the slaves from getting education, the white men darken the slave's mental vision and "annihilate the power of reason". ...read more.

And so he did, in the year of 1838, Frederick Douglass succeeded of running away to New-York and from there to New Bedford where he lived for a while and made his carrier as an abolitionist and active contributor to the anti slavery movement. Although we can find overlapping aspects from the slavery time to ours, it will be inaccurate to say that slavery on a race basis is still exists nowadays. It is true that some countries have less conscious of human rights even today and people in some countries still work with no wages at all, but this slavery is different in the basis; while slavery in the old days was based on a race difference, the slavery nowadays is about class differences in some countries and the there is nothing in their constitution or their set of rules to prevent slavery. I think that slavery as an established tendency is something that disappeared from the modern world but still, employers all over the world try to eliminate their worker's critical abilities, and by doing so they seek to destroy their worker's independent humanity. Nevertheless, the indentured worker's native endowment of intelligence and rationality gives them the potential to overcome the barrier that people with power force upon them. We're fully committed to aspire to enlightened society that would uproot the slavery that still occurred. 1 ...read more.