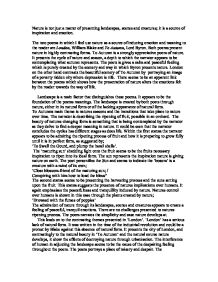 Nature is not just a matter of presenting landscapes, scenes and creatures; it is a source of inspiration and emotion.

Nature is not just a matter of presenting landscapes, scenes and creatures; it is a source of inspiration and emotion. The two poems in which I feel use nature as a source of inducing emotion and meaning to the reader are London, William Blake and To Autumn, Lord Byron. Both poems present nature in highly contrasting forms. To Autumn is a strongly appreciative poem of nature. It presents the cycle of nature and season, a depth to which the narrator appears to be contemplating what autumn represents. The poets is gives a calm and peaceful feeling which is purely created by the scenery and way in which Byron presents nature. London on the other hand contrasts the beautiful scenery of To Autumn by portraying an image of a poverty ridden city where depression is rife. There seems to be an apparent link between the poems which shows how the presentation of nature alters the emotions felt by the reader towards the way of life. Landscape is a main factor that distinguishes these poems. It appears to be the foundation of the poems meanings. The landscape is created by both poets through nature, either in its natural form or of the lacking appearance of natural form. To Autumns main theme is natures seasons and the transitions that take place to nature over time. The narrator is describing the ripening of fruit, possible in an orchard. ...read more.

In the poem man has destroyed the open vastness of nature that represents freedom. The circumstances they have created for nature, by rectifying buildings, seem in turn to have impacted their way freedom. Through destroying natures natural course they have destroyed the nature of humans. There is no interaction between humans with in the poems and the population seems to be generalised object, as opposed to each individual having a personal character. This could be linked to the destroying of natures difference and replacing the individual areas with identical building all created of concrete and blocks. To support the theory that the humans misery was self inflicted through their choice to destroyed nature, the narrator states that the people are restricted by 'mind-forged manacles'. The 'Marks of weakness, marks of woe' are human traits and do not occur throughout 'To Autumn'. To autumn has very limited presence of human. The presence that is there appear to only be there to admire the wonders of nature and in no way to interfere with its natural form. The attitude humans living in harmony with nature is what creates a far more relaxed and peaceful poem. Immorality is another focus in 'London' that is contrasted by the harmony in 'to Atumn'. There is many suggestions that the people in 'London' are morally corrupt and live in a corrupt society. The 'Chimney sweeper's cry' is one reference that shows this. ...read more.

Each stanza has a different theme and they lead on to one another. The active verbs in 'To Autumn' such as 'run' 'bend' and 'budding' emphasis the process and development in the cycle of nature. Post modifiers such as 'sitting carelessly' are also present, this is to emphasis the tranquillity the poem is presenting. Keats also uses archaic language to emphasise the ancientness of the process taking place in autumn. The language gives a detailed, vivid, visual image. The use of soft letters again shows the calmness as the poem sounds calm when being read aloud. 'To Autumn' and 'London' differ all aspects shown portrayed in the poems. The landscape, attitudes of people and feelings induced when reading the poems all differ. However the poem have a very similar theme, that nature is a source of good and beauty. Blake portrays a world without nature and emphasises that as a result of this people are poverty stricken and miserable. When reading the poem there are feeling of sorrow and disgust at the controlled immoral society. His overall message therefore must have a link with the train of thought; nature unhampered with induces peace and tranquillity. Keats is showing the beauty of nature even in one of the less favourable months. The people throughout the poem are happy in harmony with nature. The reader feels a sense of tranquillity when reading the poem. The poems therefore are highly contrasting yet their underlying moral message is similar and in their individual ways they are showing appreciation for nature. ...read more.