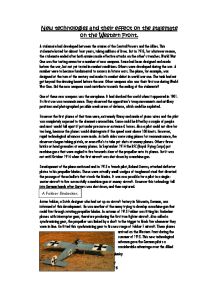 New technologies and their effect on the stalemate on the Western Front.

New technologies and their effect on the stalemate on the Western Front. A stalemate had developed between the armies of the Central Powers and the Allies. This stalemate lasted for almost four years, taking millions of lives. But in 1918, for whatever reason, the stalemate ended after both armies made effective attacks on the other's trenches. World War One was the testing arena for a number of new weapons. Some had been designed and made before the war, but not yet tested in combat conditions. Others were developed during the war. A number were to become fundamental to success in future wars. The plane, for example, was designed at the turn of the century and made its combat debut in world war one. The tank had not got beyond the drawing board before the war. Other weapons also saw their first use during World War One. Did the new weapons used contribute towards the ending of the stalemate? One of these new weapons was the aeroplane. It had shocked the world when it appeared in 1901. Its first use was reconnaissance. They observed the opposition's troop movements and artillery positions and photographed possible weak areas of defence, which could be exploited. However the first planes of that time were, extremely flimsy and made of piano wires and the pilot was completely exposed to the elements around him. Some could be lifted by a couple of people and most would fall apart if put under pressure or extreme G forces. ...read more.

Gas was by far the worst weapon of the war. However, since it remained active for a reasonable amount of time, it could not really break the stalemate, as soldiers would not want to advance into trenches, which were contaminated with their own gas. It was also used ineffectively on a number of occasions when the gas was blown back to where it had come from by the wind. Consequently the stalemate was not broken by use of gas, as it could not be effectually followed up, although many men were killed. The tank was a weapon developed by the British and the French to end the stalemate. The idea was that an armored tracked vehicle, would provide protection to troops from machines gun fire, Colonel's Ernest Swinton and Maurice Hankey, became convinced that this vehicle that could play an important role in the war. At the outbreak of the war, Colonel Swinton was sent to the Western Front to write reports on the war. He watched early battles of the war, noticing that machine-gunners were able to kill almost all enemy infantrymen who attacked. He wrote that a "petrol tractors on the caterpillar principle and armoured with hardened steel plates" would be able to neutralize the threat of machine-gunner Constructed in great secrecy, the machine was coded named 'tank' by Swinton. Overall the first prototype, nicknamed 'Little Willie' had a disappointing performance. Nonetheless Colonel Ernest Swinton remained convinced that when modified, the tank would enable the Allies to defeat the Central Powers. ...read more.

It was also modified so that a rifle could fire it. The rifle was loaded with a grenade and a blank. Then on firing, gas, which was released from the cartridge, would send the grenade over 600 feet. Grenades were a development of a 16th century idea, and both sides had them, thus grenades would not have drastically affected the stalemate. It is clear, from the available evidence that new weapons used in World War One, did contribute to both the eventual ending and the prolongation of the stalemate. Historians argue whether the tank was a contributing factor, but in terms of morale, the tank certainly was a success. The allies developed them first, and as a result had numerical and technological superiority. They did break the German defences and make significant gains. The plane was also an indirect cause of a breaking of the stalemate as photos of weak defence were spotted and then exploited. As planes became more sophisticated and heavier loads were carried, the plane became more of an offensive weapon but other aircraft were solely designed for shooting others down. When the tank and the plane were combined with infantry, (at Amiens for example) territorial gains were made, and not lost again. The use of gas did not break the stalemate, although it killed large quantities of soldiers. The modern heavy-artillery was used both defensively and offensively and only sustained the stalemate. Similarly machine-guns worked better as defensive weapons, as they were essentially 'fixed' guns and not therefore effective offensive weapons. The new weapons when used offensively with suitable tactics could effectively break the stalemate. Laurence Oglesby 10M5 07/05/07 Page 1 of 2 ...read more.