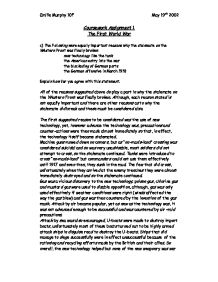 New Technology, The American Entry into World War One, The Blockade of German Port and the German Summer Offensive were important in causing the end of World War One. Discuss.

Coursework Assignment 1 The First World War c) The Following were equally important reasons why the stalemate on the Western Front was finally broken: new technology like the tank the American entry into the war the blockading of German ports the German offensive in March 1918 Explain how far you agree with this statement. All of the reasons suggested above do play a part in why the stalemate on the Western Front was finally broken. Although, each reason stated is not equally important and there are other reasons as to why the stalemate did break and these must be considered also. The first suggested reason to be considered was the use of new technology, yet, however advance the technology was, precautions and counter-actions were then made almost immediately so that, in effect, the technology itself became stalemated. Machine guns mowed down on comers, but as "no-man's-land" crossing was considered suicidal and so was very unadvisable, most soldiers did not attempt to cross, so the stalemate continued. ...read more.

The United States entry into the war brought millions of fresh, new, eager men and plentiful supplies. These supplies were all helpful and most of the supplies (as America was and still is a highly technologically advanced country) were of the new technology mentioned earlier. This abundance of new weaponry gave Britain and the allies an edge over the Germans and their allies. The allied troops also found a new inspiration to fight because of the United States entry and so an intense morale boost swept through the troops. America also had immense amounts of money (being the richest country in the world), which they lent to the allies so that the allies could buy lots of new technological weapons and medicines to help their casualties. The blockading of the German ports resulted in mass starvation and poverty due to the prevention of imports of essential foodstuffs and medicines. These shortages and terrible living conditions resulted in strikes and these strikes interrupted the war production, which in turn, halted the production of new technology. ...read more.

Due to America's entry the allied troops were fresh, determined, had high morale and had a complete advantage over the weak, exhausted German troops who were struggling to strategise and were severely disheartened over the apparent failure of their offensive. The strategy devised by Foch blew away the German's; due to the allies' united, combined attack and so the stalemate was eventually broken. The obvious defeat of the German's and the revolution in Germany eventually led to a ceasefire on the 11th of November 1918. The German's had surrendered, the stalemate was broken, and the allies had won. So, as it has been explained, the four factors said originally were not equally important, there were other major factors to consider and so those reasons were not sufficient by themselves to break the stalemate on the Western Front. The United State's entry into the war and Foch's clever strategically planned counter-attack were the reason's why the stalemate on the Western Front eventually broke and so the statement suggested previously cannot possibly be agreed with. Emilie Murphy 10F May 19th 2002 ...read more.