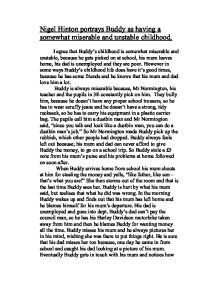 Nigel Hinton portrays Buddy as having a somewhat miserable and unstable childhood.

Nigel Hinton portrays Buddy as having a somewhat miserable and unstable childhood. I agree that Buddy's childhood is somewhat miserable and unstable, because he gets picked on at school, his mum leaves home, his dad is unemployed and they are poor. However in some ways Buddy's childhood life does have it's good times, because he has some friends and he knows that his mum and dad love him a lot. Buddy is always miserable because, Mr Normington, his teacher and the pupils in 3E constantly pick on him. They bully him, because he doesn't have any proper school trousers, so he has to wear scruffy jeans and he doesn't have a strong, tidy rucksack, so he has to carry his equipment in a plastic carrier bag. The pupils call him a dustbin man and Mr Normington said, "since you talk and look like a dustbin man, you can do a dustbin man's job." ...read more.

Buddy misses his mum and he always pictures her in his mind, wishing she was there to put things right. He is sure that his dad misses her too because, one day he came in from school and caught his dad looking at a picture of his mum. Eventually Buddy gets in touch with his mum and notices how much she has changed since he last saw her. She has short hair, she looks smart, she has a job, she has friends who laughed with her and she looks happy. Buddy every so often goes to visit her at her flat, which she shares with her friend, Joyce, but he has to be careful that his dad doesn't find out. Buddy 's dad, Terry is very irresponsible because he is never makes proper meals for Buddy, instead he buy's Chinese takeaways and he is never there to help Buddy with his homework. ...read more.

Even though Buddy does get picked on at school he still has friends such as, Julius and Charmian, who are friends with him because, they too stand out from the crowd and they can make him think that life is worth living. His dad buys Buddy a new pair of school trousers and a new rucksack, so he doesn't have to wear his jeans or carry his equipment in a plastic bag. Mr Normington and the pupils in 3E don't pick on him as much, now that he looks a lot tidier. Buddy knows that even though his mum left, she still loves him and only did it because, she thought it was for the best. He also knows that his dad was only stealing so he would be able to provide Buddy's needs, (e.g. new school trousers), buy his Harley Davidson back and so they wouldn't be poor. This makes Buddy feel happier and more loved, but he knows that life doesn't always have those fairytale endings. By Rebecca Johnson 9HB ...read more.