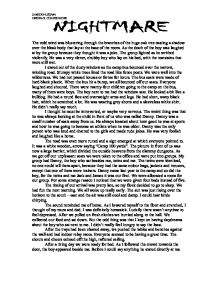 The cold wind was blustering through the branches of the huge oak tree casting a shadow over the bleak body that lay at the base of the room. As the death of the boy was laughed at by the group because they thought it was a joke. The group lighted as he writhed violently. He was a very clever, chubby boy who lay on his bed, with the tearstains that were still wet. I stared out of the dusty window as the camp bus bounced over the narrow, winding road. Stumpy white trees lined the road like fence posts. We were well into the wilderness. We had not passed houses or farms for hours. The bus seats were made of hard black plastic. When the bus hit a bump, we all bounced off our seats. Everyone laughed and shouted. There were twenty-four children going to the camp on the bus, many of them were boys. The boy next to me had the window seat. He looked a bit like a bulldog. He had a round face and overweight arms and legs. ...read more.

Before I could say anything he stared directly at me then slowly was lost into the deep flock. As I headed to my cabin, Jack and James caught up with me and we all walked together. As we walked, we discussed our new friends, which reminded me about the boy. I still did not know his name and so asked the twins if they had met him. Both of them stopped in amazement and looked at me as if I needed to go to a psychiatrist. Although they never said anything and laughed away, I could make out what they were saying. Their facial expression was very open. It informed me that I was imagining the boy. There was nothing else said. The cabin door opened and we were greeted by Danny. The mild scent of the room approached my nose, and disturbed me from the unknown boy. We sat down near Danny's bunk. It was James' idea to tell ghost stories. As the ghost stories went on a dark feeling of revolution suddenly filled me. It felt like a thick black breeze. Which made me breath heavily. Although the others never realized, I felt as if I was going to die. ...read more.

I heard a sudden scrabbling at the window. A muted cry was heard from Danny, and the figure vanished. My mind went pitch black. I got up and looked directly at Danny's bunk. He was still there, with no blood, nothing. It must have been a nightmare. Danny was right the boy was unreal. As everyone was waking-up the curtains were pulled to allow the light. From nowhere Jack screamed and pointed at the window. At the same time James cried touching his face that was covered with blood. But it wasn't James's blood it was coming from the top bunk, Danny's, and their written in blood was carved "believe the story or you are next." The heavy drips from the window had made a puddle. What did this mean? It can't be true? I dreamt it right? How can some one kill someone in your dreams? It can't have been real, I didn't believe in the boy. Where do we go from here? What's this mystery? No one could tell what would come next, but I have a vision in my mind that will not go away, a vision that the next victim is me. . ZAKEER HUSSAIN ORIGINAL COURSEWORK ...read more.