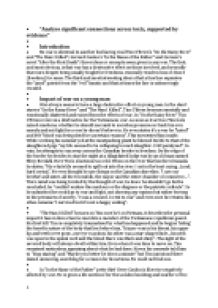 No war is identical to another but having read Tim OBriens On the Rainy River and The Man I Killed; Gerrard Conlons In the Name of the Father and Cormiers novel After the First Death; three ideas or concepts seem given in any war.

﻿1. ?Analyse significant connections across texts, supported by evidence? 2. 3. Introduction 4. No war is identical to another but having read Tim O?Brien?s ?On the Rainy River? and ?The Man I Killed?; Gerrard Conlon?s ?In the Name of the Father? and Cormier?s novel ?After the First Death?; three ideas or concepts seem given in any war. The first, and most obvious, is that war has a destructive effect on those involved, and secondly that wars despite being usually fought for freedoms, ironically result in loss of choice (freedom) for some. The third and most interesting idea is that a fine line separates the ?good? patriot from the ?evil? fanatic and that at times the line is unknowingly crossed. 5. 6. Impact of war on a young man 7. War always seems to have a huge destructive effect on young men. In the short stories ?On the Rainy River? and ?The Man I Killed?, Tim O?Brien becomes mentally and emotionally shattered and ruined from the effects of war. In ?On the Rainy River? Tim O?Brien receives a draft notice for the Vietnamese war. As soon as it arrives Tim feels mixed emotions, whether he should succumb to societies pressures or back his own morals and not fight for a war he doesn?t believe in. He even states it?s a war he ?hated? and felt ?blood was being shed for uncertain reasons?. This tormented him inside. While working his summer job at the meatpacking plant he likened his life to that of the slaughtered pigs ?my life seemed to be collapsing toward slaughter. ...read more.

He, like Tim, had his freedom of choice taken, ?the young man had never wanted to be a soldier? ?He was not a fighter?, he was just purely an academic, ?he wanted to be a teacher of mathematics?. In this short story Tim?s freedom was also once again taken, he had no choice but to shoot, if he hadn?t he instead would have been shot. Kiowa even reminded him, stating ?Tim it?s war?he had a weapon right??. Despite Tim being aware that everyone ?had him zeroed in? he could not justify what he had done, but I think deep down he?d have realised it wasn?t his fault, he didn?t have a choice but to shoot him. 19. 20. In ?In the Name of the Father? Gerry Conlon is convicted for the implementation of the London bombing that killed five people. He is innocent. His freedom to live out a normal life is taken. The actual bomber McAndrew even told him that ?It?s a war-you are the innocent victims?. Due to the extremity of the times in Britain a new law was passed ?The Prevention of Terrorism Act? which allowed British authorities to hold suspects for seven days without them having access to the outside world. Gerry was held under this act and during this time tortured and beaten. Due to this, he signed a confession. This was ironical for Gerry as in effect he was forced to confess and hence give away his life and his freedom, when he was in fact profoundly innocent. Gerry had no choice but to confess, submitting his life?s freedoms away in the process. ...read more.

This is where he crossed the line, not only he sent his son directly to the terrorists to be tortured but he?d analysed everything about him, invading his privacy his entire life consequently forbidding him from a normal life. General Marchand crossed the line and became a fanatic; destroying his ?sons? life in the process. 32. 33. Conclusion 34. Three ideas seem given in any war, through the texts that have been discussed you can clearly see them. War has a destructive effect on those involved; from Tim O?Brien mentally capitulating to Miro being transformed into a monster you can see how this common theme is apparent. The idea that wars despite usually being fought for freedoms ironically result in loss of choice (freedom) for some was shown through the fact Tim was forced to go to war and murder, by the ?democratic? nation of America, along with the innocent conviction of Gerry in ?In the Name of the Father?. The third and most interesting idea discussed is that a fine line separates the ?good? patriot from the ?evil? fanatic and that at times the line is unknowingly crossed, this idea was portrayed strongly by Azar who was savage in his remarks emphasizing the sickness of fanaticism. General Marchand destroying his own ?sons? life further supported this concept. These three ideas were the ?connection? among the four texts and these ideas are appear to be constant in any given war. 35. 36. Hamish Kelt 37. 38. 39. 40. 41. 42. ...read more.