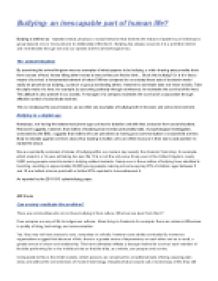 ﻿Bullying- an inescapable part of human life? Bullying is defined as: ?repeated verbal, physical, or social behavior that involves the misuse of power by an individual or group towards one or more persons to deliberately inflict harm?. Bullying has always occurred; it is a primitive instinct and reverberates through not only our species but the animal kingdom too. The animal kingdom By examining the animal kingdom we see examples of what appears to be bullying; a robin chasing away smaller birds from sources of food; horses biting other horses to ensure they are first to drink? But is this bullying? Or is it in fact a means of survival: a fundamental element of nature? When compared to our society these acts of exclusion would easily be perceived as bullying, a person or group dominating others. However to dominate does not mean to bully. Take the alpha male of a herd, for example: by assuming authority through dominance, he maintains the survival of the herd. This attitude is also present in our society. ...read more.

Nearly one in three victims of bullying have admitted to truanting, resulting in approximately 20,000 young people missing school everyday 67% of children aged between 5 and 18 are bullied at some point with a further 87% reported to have witnessed it. As reported by the 2011 IDC cyberbullying paper: 406 Words Can society eradicate the problem? There are communities who do not have bullying in their culture. What can we learn from them? If we compare our way of life to indigenous cultures, tribes living in Amazonia for example, there are colossal differences in quality of living, technology and communication. Yes, they may not have access to cars, computers or schools; however case studies conducted by numerous organisations suggest that because of this, there is a greater sense of dependency on each other and as a result, a greater sense of unison and relationship. This trend ultimately reflects a stronger instinct for survival: each member of the tribe performing his or her individual role so that the tribe, as a whole, can prosper and survive. ...read more.

Another student observes: A further criticism of these schemes is that they are primarily geared toward school bullying: social negation, physical and verbal bullying; furthermore they do not necessarily encompass the many aspects of cyber-bullying. Notwithstanding this, the only way we are going to create a more caring society is through a combination of methods such as legislation, education and co-operation between different factors of society, for example: state, church and schools. Bullying has become an epidemic that must be addressed. For the sake of all young people and future generations there is a need for members at the forefront of society to take action. Nevertheless we must accept that we cannot transform our culture to that of the Amish or Amazonia communities and without draconian legislation it is difficult to control all content in the digital spectra. No one deserves to be bullied, however it is up to us to take appropriate measures to help both victims and bullies, so that we can prevent the escalation of bullying related events and in doing so, demonstrate a healthier example to future generations. 935 Words ...read more.