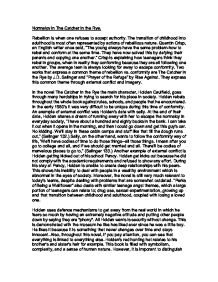 Normalcy in The Catcher in the Rye

Normalcy in The Catcher in the Rye. Rebellion is when one refuses to accept authority. The transition of childhood into adulthood is most often represented by actions of rebellious nature. Quentin Crisp, an English writer once said, "The young always have the same problem-how to rebel and conform at the same time. They have now solved this by defying their parents and copying one another." Crisp is explaining how teenagers think they rebel in groups, when in reality they conforming because they are all following one another. The average teen is always looking for away to escape conformity. Two works that express a common theme of rebellion vs. conformity are The Catcher in the Rye by J.D. Salinger and "Prayer of the Refuge" by Rise Against. They express this common theme through external conflict and imagery. In the novel The Catcher in the Rye the main character, Holden Caulfield, goes through many hardships in trying to search for his place in society. Holden rebels throughout the whole book against rules, schools, and people that he encountered. In the early 1950's it was very difficult to be unique during this time of conformity. An example of external conflict was Holden's date with sally. At the end of their date, Holden shares a dream of running away with her to escape the normalcy in everyday society, "I have about a hundred and eighty bucks in the bank. I can take it out when it opens in the morning, and then I could go down and get this guy's car. No kidding. We'll stay in these cabin camps and stuff like that till the dough runs out," (Salinger 132.) Sally, on the other hand, wants to follow the conformity way of life, "We'll have oodles of time to do those things--all those things. I mean after you go to college and all, and if we should get married and all. ...read more.

There'll be oodles of marvelous places to go to," (Salinger 133.) Another example of external conflict is Holden getting kicked out of his school Pency. Holden get kicks out because he did not comply with the academic requirements and refused to show any effort. During his stay at Pency, Holden is unable to create deep relationships with his peers. This shows his inability to deal with people in a wealthy environment which is abnormal in the eyes of society. Moreover, the novel is still very much relevant to today's teems, despite dealing with problems that are somewhat outdated. "Perks of Being a Wallflower" also deals with similar teenage angst themes, which a large portion of teenagers can relate to; drug use, sexual experimentation, growing up and that transition between childhood and adulthood, coupled with losing a loved one. Holden uses defence mechanisms to get away from the real world in which he fears so much by having an extremely negative attitude and putting other people down by saying they are "phony". All Holden wants is security without change. This is demonstrated with the museum he like has liked ever since he was a little boy. He likes it because it is something that never changes over time and stays innocent. Also, throughout this novel, if you pay attention, you can see that everything is linked to everything else. Holden's red hunting hat relates to his brother's and sister's hair for example. This book is filled with symbolism, complexity, and a sense of human nature. However, it is imporant to distinguish between the things Holden says and does that display signs of depression and those where he is simply unable to cope with someone or something being phony and unbearable. In the latter case, Holden is deconstructing social norms and exposing them for the exercises in affectedness they really are. For example, having to say "Glad to have met you" to someone you're not at all glad to have met. ...read more.

Any of you who were even mildly rebellious teenagers know that once you start fully understanding why adults act the way they do, it's hard not to get really upset about it and want to forge into a new way of being. Holden is overly attached to childhood and its innocence, and can't get along in the adult world until he achieves some sort of "closure" about his brother's death. In the song "Prayer of the Refuge" the band Rise Against tries to portray an average teenager trying to break away from the normalcy of society. An example of how they use imagery to express the theme of rebellion vs. conformity is "We are the angry and the desperate, the hungry, and the cold, we are the ones who kept quiet, and always did what we were told," (Rise Against.) This is said in a very bold and angry manner. This expresses the stress everyday teenagers go through in order fit into the normalcy of everyday society. "Don't hold me up now, I can stand my own ground, I don't need your help now, you won't let me down." This excerpt expresses independence. They are trying to show rejection towards the approval of the adult world. This song really describes Holden. An example of imagery in The Catcher in the Rye is Holden's usage of provocative language. Throughout the book, Holden uses inappropriate language. During the 1950's swearing was considered extremely vulgar and offensive. His usage of such language expresses how he really feels which the complete opposite of how he is portrayed as. Both The Catcher in the Rye and "Prayer of the Refuge" are examples of the theme rebellion vs. conformity. From generation to generation teens everywhere try to break down the barriers of conformity. They both express how teens of today feel about society. Both works speak of what every teen wishes they could say themselves. ...read more.