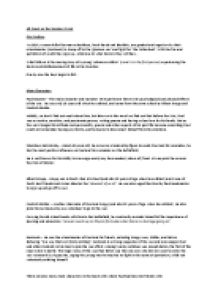 Notes on &quot;All Quiet on the Western Front&quot;

﻿All Quiet on the Western Front Plot Outline -In 1914, a room full of German schoolboys, fresh-faced and idealistic, are goaded and urged on by their schoolmaster (Kantorek) to troop off to the ?glorious war? and fight for ?the Fatherland?. With the fire and patriotism of youth they sign up ? oblivious to what horrors they will face... What follows is the moving story of a young ?unknown soldier? (novel is in the first person) experiencing the horror and disillusionment of life in the trenches. One by one the boys begin to fall... Main Characters Paul Baumer ? The main character and narrator. He experiences the severe psychological and physical effects of the war. He was only 19 years old when he enlisted, and came from the same school as Albert Kropp and Fredrich Muller. Initially, we don?t find out much about him, but later on in the novel we find out that before the War, Paul was a creative, sensitive, and passionate person, writing poems and having a clear love for his family. But as the war changed his attitude and personality, poems and other aspects of his past life become something Paul could not remember having any link to, and he learns to disconnect himself from his emotions. ...read more.

-One of the major themes of the novel is the difficulty of soldiers to revert to civilian life after having experienced extreme combat situations. The young soldiers realise that unlike the older soldiers who can go back home to their families, there is nothing for them to go back to ? their generation has been ruined by the war. They ask themselves the question: ?what is the point about going back to school??, everything they learnt at school wasn?t useful and hadn?t helped them on the front. For example, they didn?t learn how to make a fire with wet wood or light a cigarette in the wind. Paul's own visit on leave to his home (after spending about 3 years in the army) highlights the cost of the war on a soldier?s psyche. The town has not changed since he went off to war; however, he finds that he does ?not belong here anymore, it is a foreign world.? He feels disconnected from most of the townspeople. His father asks him "stupid and distressing" questions about his war experiences, not understanding ?that a man cannot talk of such things.? Paul even confronts his old teacher, Kantorek, and he finds him giving the exact same speech about going off to ?glorious war? to another eerily similar, idealistic class of young schoolboys. ...read more.

as ours and that we?re all just as scared to death, and that we die the same way and feel the same pain. Forgive me! If we threw these uniforms away you could be just as much my brother as Kat and Albert. Take twenty years from my life, camarade, and get up again ? take more because I don?t know what I?m going to do with the years I?ve got...? -Remarque comments in the preface that ?All Quiet on the Western Front? will try simply to tell of a generation of men who, even though they may have escaped shells, were destroyed by the war. This internal destruction can be found as early as the first chapter as Paul comments that, although all the boys are young, their youth has left them. When on leave from the front, Paul feels strongly isolated from his family and removed from daily life. This book is overall a landmark for its vivid description of the Great War?s tragedy from a German soldier?s point of view. Remarque?s evocation of the horrors of modern warfare has lost none of its force. In the 1930 film, the final shot ? a close-up of one of the character?s hand reaching out to a butterfly, quivering as a gunshot cracks and falling still in death ? is an amazingly poignant image. ...read more.