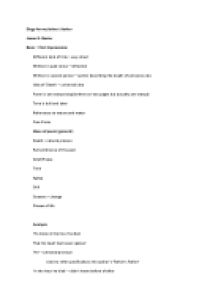 ﻿Elegy for my father?s father James K. Baxter Basic ? First Impressions: Different kind of title ? very direct Written in past tense ? reflection Written is second person ? author describing the death of someone else Idea of ?Death? ? universal idea Poem is one stanza long (written on two pages but actually one stanza) Tone is dull and slow References to nature and water Free Verse Ideas of poem (general): Death ? natural process Remembrance of the past Grief/Praise Time Aging Skill Seasons ? change Phases of life Analysis: ?He knew in the hour he died That his heart had never spoken? ?He? ? personal pronoun Used to refer specifically to the author?s ?Father?s Father? ?in the hour he died? ? didn?t know before of after Point of realisation ? stuck in a period of realisation Long death ? peaceful or painful? ? died? ? strong with more impact instead of ?passed away? ?his heart had never spoken ? personification the father?s father never truly expressed his real feelings or emotions He was more reserved and detached ? that was his personality ?heart? ? ...read more.

Added to exaggerate the length of life ?tower? ? usually seen as something strong and sturdy, and characteristics linked to males With the addition of ?broken? it implies how life is unexpected and can fall apart ?They stood by the graveside From his bitter veins born And mourned him in their fashion? ?they stood by the graveside/?/And mourned him in their fashion? The theme of death is present as the author is talking about the burial of his grandfather The family members were finding it difficult to mourn for his death as they all ?mourned him in their fashion? The family members did not actually know how the grandfather wanted to be fare welled as ?his heart had never spoken?, he hadn?t expressed what he wanted of felt. ?From his bitter veins born? ?bitter? ? resulting from grief, anguish and disappointment. Links back to the ?heart had never spoken? The grandfather felt ?bitter? after ?he knew in the hour he died/?/that his heart had never spoken ?He could slice and build? On his walking shoulder held Under the lion sun? ?He could slice and build? A more ...read more.

As the time is coming nearer to the cold ?Winter? of end, things are becoming progressively slower ? the tone is transferred back to being dull ?sat? enhances the grandfathers incapability Reflects the old age of inability in contrast to the prime age of activeness ?The tongues of water spoke And his heart was unafraid? ?tongues of water spoke? ? personification Another person of his conscience talking to him in his dreams Reminding him that all this time the grandfather had been able to keep the emotions bolted in and now death shouldn?t be something to bring them out Baxter?s father?s father was aware of the cycle of life ? shown through the various seasons This aided his heart to be ?unafraid? ?water? also has its own cycle, like the life cycle It is an essential element for life, like the ?heart? The ?heart? and ?water? are both natural aspects of life ? Baxter uses these aspects to explain how natural death comes as a process of life Despite the grandfather?s failure to express feelings, he was sensitive to his experiences of the natural world around him. ...read more.