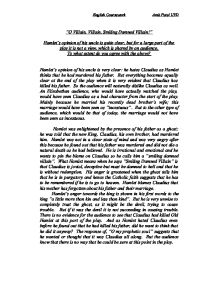 &quot;O Villain, Villain, Smiling Damned Villain!&quot; Hamlet's opinion of his uncle is quite clear, but for a large part of the play it is not a view, which is shared by an audience. To what extent do you agree with the above

"O Villain, Villain, Smiling Damned Villain!" Hamlet's opinion of his uncle is quite clear, but for a large part of the play it is not a view, which is shared by an audience. To what extent do you agree with the above? Hamlet's opinion of his uncle is very clear: he hates Claudius as Hamlet thinks that he had murdered his father. But everything becomes equally clear at the end of the play when it is very evident that Claudius has killed his father. So the audience will naturally dislike Claudius as well. An Elizabethan audience, who would have actually watched the play, would have seen Claudius as a bad character from the start of the play. Mainly because he married his recently dead brother's wife; this marriage would have been seen as "incestuous". But to the other type of audience, which would be that of today, the marriage would not have been seen as incestuous. Hamlet was enlightened by the presence of his father as a ghost; he was told that the new King, Claudius, his own brother, had murdered him. ...read more.

The people of Denmark are fond of Claudius because he wants to protect Denmark and avoid war. He has a plan so he sends the diplomats, Cornelius and Voltermand, to stop the war but if this didn't work Claudius had thought ahead and mobilised the army. This shows that Claudius has a presence of mind. Because of this the audience sides with Claudius at the beginning of the play. He makes the court happy as he had married the old queen and so that means that the court doesn't have to change; she is the "Imperial jointress of the state". Claudius goes to a great effort to make people like him: he organises gatherings and social events to try and unify the court. In Act one Scene two Hamlet is depressed, so Claudius sends for his friends Rosencrantz and Guildenstern. Claudius even gives advice and also makes him the heir to the throne. This seems that he has faith in Hamlet. Hamlet still doesn't like him, so the people in the court will think that he is discourteous as Claudius is trying to help him out. ...read more.

But today's audience would have agreed with Claudius, as we do not believe in the "Divine Right Of Kings" and we could see why he did what he did. Claudius had an overpowerful sense of ambition to become king. He is cheating the whole kingdom and God. And as he said in his soliloquy he is not prepared to give up his kingship. After the king has said his soliloquy he really shows how deceptive he is. He treats Hamlet very badly and sends him to England so he can walk into his death. "He shall with speed to England" he also poisons Laerates' mind and makes him want to kill Hamlet because he killed his father, "To cut his throat I' th' church." Finally, Claudius had something to do with all the deaths at the end this links with "Something's rotten in the state of Denmark" in Act one Scene five. I think that, overall, today's audience would have been able to understand Claudius and sympathise with him but the Elizabethan audience would have definitely hated Claudius as they believed in the "Divine Right Of Kings". English Coursework Amit Patel UVD ...read more.