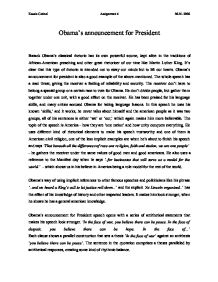 Obama's announcement for President Barack Obama's classical rhetoric has its own powerful source, kept alive in the traditions of African-American preaching and other great rhetoricer of our time like Martin Luther King. It's clear that this type of rhetoric is intended not to sway our minds but to lift our hearts. Obama's announcement for president is also a good example of the above-mentioned. The whole speech has a read threat, giving the receiver a feeling of reliability and security. The receiver don't have to belong a special group or a certain race to vote for Obama. He don't divide people, but gather them together under one unit, with a good effect on the receiver. ...read more.

He also uses a reference to the Manifest day when he says '..for businesses that will serve as a model for the world.' - which shows us in his believe in America being a role model for the rest of the world. Obama's way of using implicit references to other famous speeches and polititicians like his phrase '..and we heard a King's call to let justice roll down..' and the explicit 'As Lincoln organized..' has the effect of his knowledge of history and other respected leaders. It makes him look stronger, when he shows he has a general american knowledge. Obama's announcement for President speech opens with a series of antithetical statements that makes his speech look stronger. 'In the face of war, you believe there can be peace. ...read more.

Barack Obama, posess a lot from the three main rhetorical styles; ethos, logos and pathos. Logos is something Obama don't shine through with here, i have seen som one-on-one interviews with him, where it comes out, but i dont think it's particularly relevant to mention it, in his announcement. But his credibility, ethos, is very strong. The way he refer himself as a 'tall gangly man' and his earlier yearly amount of $13.000 make the people relate and believe in him. Pathos is also one of his more convincing talents, as soon as he mentions the young american men, in Iraq, he becomes a picture of a leader voting for freedom and idividuality. That everybody and every land can be different and with one purpose only, to embraise the differences between us. ?? ?? ?? ?? Kessie Cetinel Assignment 4 08.01.2008 ...read more.

There are lots of observations made about the techniques used and the references to rhetoric devices are good. To improve, the explanations need to be linked to the speaker and his purpose.