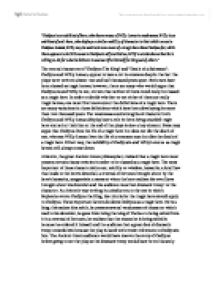 &quot;Oedipus is an odd kind of hero, who shares many of w***y Loman's weaknesses; w***y is an odd kind of anti-hero, who displays a similar nobility of character to that which we see in Oedipus. Indeed, w***y may be said to be even more of a tragic hero than

"Oedipus is an odd kind of hero, who shares many of w***y Loman's weaknesses; w***y is an odd kind of anti-hero, who displays a similar nobility of character to that which we see in Oedipus. Indeed, w***y may be said to be even more of a tragic hero than Oedipus for, while there appears to be little sense in Oedipus's self mutilation, w***y's suicide shows that he is willing to die for what he believes in and sacrifice himself for the good of others." The central characters of "Oedipus The King" and "Death of a Salesman"; Oedipus and w***y Loman, appear to have a lot in common despite the fact the plays were written almost two and half thousand years apart. Both men have been classed as tragic heroes; however, there are many who would argue that Oedipus is and w***y is not, or even that neither of them could really be classed as a tragic hero. In order to decide whether or not either of them are really tragic heroes, one must first know about the definitions of a tragic hero. There are many variations in these definitions which have been developing for more than two thousand years. The weaknesses and strengths of character both Oedipus and w***y Loman display have a role in them being awarded tragic hero status but their fate at the end of the plays is also a key element. ...read more.

In Death of a Salesman, w***y Loman is ready to, and eventually does, lay down his life to secure is sense of personal dignity therefore in a modern sense he can be seen as a tragic hero. The statement that "w***y is an odd kind of anti-hero" can be justified as the anti-hero is described as "a persona characterized by a lack of "traditional" heroic qualities" and when w***y's character is compared with the criteria set out by Aristotle, this is indeed the case. A 1950's audience would have been able to empathize with w***y much more easily than with Oedipus. In fact, Arthur Miller recalls watching members of an audience cry when the curtain came down on Death of a Salesman. One could argue that w***y Loman is a modern hero with whom the modern world can relate to which would make him seem to be even more of a tragic hero than Oedipus who lived in an era which was so different. Both Oedipus and w***y Loman have several weaknesses and some of these can be interpreted as their "fatal flaws" or hamartia, as Aristotle calls them. These weaknesses serve to highlight the humanity of both characters but for different reasons. Oedipus's weaknesses make him more than a king in a world where power was everything and w***y's weaknesses make him more than a number in the American capitalist system. ...read more.

In contrast, Oedipus's self-mutilation seems pointless and his flaws and incest tarnish his nobility. Modern audiences empathize with the "common man" and the issues he deals with, such as; financial difficulty, moral issues and mental illness whereas not many audiences can empathize with an ancient Greek myth about a man who murdered his father and married his mother. However, Oedipus could be said to be more of a tragic hero because the idea that w***y died for his beliefs is not well-founded. Didn't w***y commit suicide to escape the world he could not cope with and for financial gain? He took and easy way out and received no respect for it; only his family and neighbour came to the funeral in the Requiem of Death of a Salesman. Exile was worse than death for Oedipus; not only did he have to cope with losing his wife because of what he did, he had to lose his children as well. It takes tremendous strength of character to live with the shame Oedipus has and for this he is respected. In conclusion, both w***y Loman and Oedipus are portrayed as tragic heroes, albeit in very different times where the important things in society are worlds apart. The answer to the question of whether Oedipus or w***y make a more credible tragic hero is a matter of opinion as both characters possess some of the features of the tragic hero of their time. ...read more.