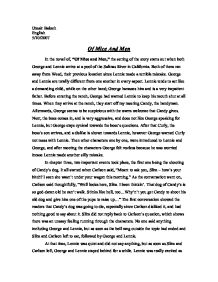 Umair Baloch English 5/10/2007 Of Mice And Men In the novel of, "Of Mice and Men," the setting of the story starts out when both George and Lennie arrive at a pool of the Salinas River in California. Both of them ran away from Weed, their previous location since Lennie made a terrible mistake. George and Lennie are totally different from one another in every aspect. Lennie tends to act like a demanding child, while on the other hand; George harasses him and is a very impatient father. Before entering the ranch, George had warned Lennie to keep his mouth shut at all times. When they arrive at the ranch, they start off my meeting Candy, the handyman. Afterwards, George seems to be suspicious with the warm welcome that Candy gives. Next, the boss comes in, and is very aggressive, and does not like George speaking for Lennie, but George stays cynical towards the boss's questions. After that Curly, the boss's son arrives, and a dislike is shown towards Lennie, however George warned Curly not mess with Lennie. Then other characters one by one, were introduced to Lennie and George, and after meeting the characters George felt restless because he was worried incase Lennie made another silly mistake. In chapter three, two important events took place, the first one being the shooting of Candy's dog. It all started when Carlson said, "Meant to ask you, Slim - how's your bitch? I seen she wasn't under your wagon this morning." As the conversation went on, Carlson said thoughtfully, "Well looka here, Slim. ...read more.

Carlson got the opportunity to kill the dog. It all started when Carlson came into the bunkhouse and when he smelled the disgusting odor from the dog he started an argument with Candy. Carlson started telling Candy how pointless the dog was, but Candy did not give in so easily. George too, tried changing the topic, but this time Carlson was serious; he was going to shoot the dog. There was absolutely nothing Candy could do and when he looked at others to seek help, no one said anything. Whit, a young laboring man came in, and started talking about an article in the magazine which someone wrote who used to work in the ranch three months ago. Even with this big conversation going on, Carlson did not join in; all he did during that time was to stare at the old dog. He then started speaking again, and this time was straightforward and said, "If you want me to, I'll put the old devil out of his misery right now and get it over with. Ain't nothing left for him. Can't eat, can't see, can't even walk without hurtin'." The only possible way that the dog was going to die would be if Carlson shot him. Candy then said, "You ain't go no gun," and after hearing what Carlson had to say he was disappointed since he did have one and was willing to use it. Candy then decided to make an excuse and it did not work at all, instead it made Carlson wanting to kill the dog even more at the current moment. ...read more.

In my opinion, as the fight came to an end that would have been the most dramatic part because all the characters would be thinking of what was going to happen next. Would George and Lennie get sacked? Millions of thoughts would be running in their minds. However, thanks to Carlson and Slim everything was going to be fine since they told Curley what to say about his damaged hand. In conclusion, 'Of Mice And Men' is an exciting novel and makes you think a lot. During that weekend, there had been a lot of tension and jealousy throughout all the characters. The two main events that showed this was the death of Candy's dog, and the fight between Lennie and Curley. In this novel the language Steinbeck uses is perfect, and suits the time period. Even though the word usage is really rough, and mean it works out for the time period, which makes it realistic. Even some of the words that were used are quite confusing and you have to think about what they actually mean. Even though he used many unusual words such as 'pounding your tail,' and 'bustin a gut' these words helped the novel quite some bit, and brought out various aspects of the story. Steinbeck also used a variety of literary devices. One of the main literary devices Steinbeck used were metaphors. One example of a metaphor in the novel could be Candy's dog being a metaphor for old age. Even though this is only one, there are many more Steinbeck uses to show various aspects of the story. Other literary devices Steinbeck uses are alliteration and onomatopoeia. You don't see much of these literary devices being used, however they are still present. Words: 2716 ...read more.