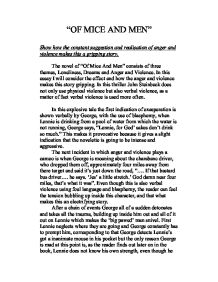 Of mice and men - Show how the constant suggestion and realisation of anger and violence makes this a gripping story.

"OF MICE AND MEN" Show how the constant suggestion and realisation of anger and violence makes this a gripping story. The novel of "Of Mice And Men" consists of three themes, Loneliness, Dreams and Anger and Violence. In this essay I will consider the effect and how the anger and violence makes this story gripping. In this thriller John Steinbeck does not only use physical violence but also verbal violence, as a matter of fact verbal violence is used more often. In this explosive tale the first indication of exasperation is shown verbally by George, with the use of blasphemy, when Lennie is drinking from a pool of water from which the water is not running, George says, "Lennie, for God' sakes don't drink so much." This makes it provocative because it gives a slight indication that the novelette is going to be intense and aggressive. The next incident in which anger and violence plays a cameo is when George is moaning about the charabanc driver, who dropped them off, approximately four miles away from there target and said it's just down the road, ".... If that bastard bus driver.... he says. 'Jes' a little stretch.' God damn near four miles, that's what it was". Even though this is also verbal violence using foul language and blasphemy, the reader can feel the tension bubbling up inside this character, and that what makes this an electrifying story. After a chain of events George all of a sudden detonates and takes all the trauma, building up inside him out and all of it out on Lennie which makes the 'big pawed' man snivel. ...read more.

book try to carry on in their own business and divert the attention of Carlson, but there like for violence and anger overcomes them and they can't not resist, "What the hell's takin' him so long." Even if their was a viewer instead of a reader whatching the film, they would not concentrate on what is happening on the screen but would try to listen for the 'bang' of the gunshot, as I experienced it whilst whatching the motion picture. The decimation of candy's dog is like a premonition to what happens to Lennie in the final part of the story. All this fuss about the dog's shooting is what makes the story more hair rising. As Carlson comes back after engulfing the old dog, Curley burst into the bunk house looking for his wife, seconds later he goes off into the barn looking for Slim followed by Carlson and Whit as they think there is going to be a conflict, "I guess maybe I'd like to see this...Curley's just spoilin' or he wouldn't start for Slim.... But jus' the same, he better leave Slim alone." this authenticates how much the itinerant workers relish violence. Whilst rest of the hands have gone to witness an upbringing confrontation, George, Lennie and candy are the only people left in the bunk house. In this affair Lennie shows a lot of verbal violence through his presages, when George mention what they are going to get when they are living 'offa the fatta the lan', ".... A couple stripe cats, but you gotta watch out them cats don't get the little rabbits." ...read more.

Finally George finds Lennie hiding near the bush, George has made his mind up and he is going to kill Lennie for the benefit of Lennie because of Curley's violent instructions, "Shoot for his guts. That'll double' im over." This would make Lennie suffer and Lennie would have a long and painful death. That's why this incident is primitive to the shooting of Candy's dog, as he is also shot in the back of the head. The reader knows that George does not want to kill George but is shooting Lennie for his benefit because it says George has great difficulty talking to Lennie before killing him. It is very perplexing for George to kill Lennie, this is shown when George raises the gun to Lennie's head but his hands shake so he drops his hand to the ground. When George kills Lennie it is a very antagonising moment for both, the reader and the two characters, this is what makes the story gripping. This novel 'Of Mice And Men' is full of anger and violence and that is what amuses the reader. After Lennie kills the small mouse in the first part, the next thing he kills is something bigger, the pup and then Curley's wife and this shows the reader that Lennie was unaware of his own strength. . Most people find violence exciting especially physical, but only in fiction not in reality, in other words second hand rather then first hand and the thing anger and violence does is that it stimulates the brain and makes the reader's blood flow faster. In this novelette verbal violence is greater then physical and in some parts the threat of violence is more aggressive even though not fulfilled and that is what makes "Of Mice And Men" a gripping story. ...read more.