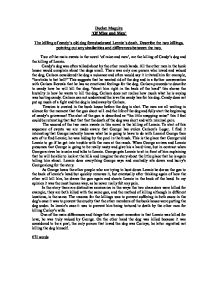 'Of Mice and Men' - The killing of candy's old dog foreshadowed Lennie's death. Describe the two killings, pointing out any similarities and differences between the two.

Declan Maguire 'Of Mice and Men' The killing of candy's old dog foreshadowed Lennie's death. Describe the two killings, pointing out any similarities and differences between the two. Two of the main events in the novel 'of mice and men', are the killing of Candy's dog and the killing of Lennie. Candy's dog was often talked about by the other ranch hands. All the other men in the bunk house would complain about the dogs smell. There was only one person who loved and valued the dog, Carlson considered the dog a nuisance and often would say it irritated him for example, "he stinks to bet hell!" This suggests that he wanted rid of the dog and in a further conversation with Carlson Reveals that he has no emotional feelings for the dog. ...read more.

The second of the two main events in this novel is the killing of Lennie. To start of this sequence of events we are made aware that George has stolen Carlson's Lugar. I find it interesting that George instantly knows what he is going to have to do with Lennie! George then sets of to find Lennie; he was hiding by the pool in the brush. This is the place that George told Lennie to go if he got into trouble with the men at the ranch. When George arrives and Lennie presumes that George is going to be really nasty and give his a hard time, but in contrast when George arrives he is calm and talks to Lennie. ...read more.

In the story there are distinctive seminaries in the ways the two characters were killed for example, they are both killed with the same gun, and the method of killing although in different locations, is the same. The reasons for the killings was to prevent suffering in both cases in the dog's case it was to prevent the cruelty that the other members of the bunk house were putting the dog under. In lennie's case it was to prevent him being tortured to death by the other men for killing Curley's wife. One of the main differences and things that we must remember is that Lennie was killed for love; he was truly valued by George. On the other hand the dog was killed because it was considered to be a pest, the only person that loved the dog was Curleys, he latter regretted not killing the dog himself. 671 words ...read more.

The question here asks for a description and comparative analysis of two section of John Steinbeck's 'Of Mice and Men', the two sections being the killing of Candy's dog and the killing of Lennie. There is a consistent focus on ...

The question here asks for a description and comparative analysis of two section of John Steinbeck's 'Of Mice and Men', the two sections being the killing of Candy's dog and the killing of Lennie. There is a consistent focus on the two sections, although it could be argued that there is not sufficient depth given to the description, which leave the candidate commenting for the sake of commenting and not gaining many marks in doing so. This wastes valuable exam time and.or coursework word limits, so candidate should be aware at all times if their analysis is ineffective - if something is obvious to the reader, is it worth commenting about at length?

The candidate does well to demonstrate knowledge of the two sections, though the description is very simplistic and a possible misunderstanding of the gravity of the scenes has led the candidate to comment on worthless pieces of information e.g. "Carlson considered the dog a nuisance and often would say it irritated him for example, Ã¢â‚¬Å“he stinks to bet hell!Ã¢â‚¬Â This suggests that he wanted rid of the dog and in a further conversation with Carlson Reveals that he has no emotional feelings for the dog (sic)". Not only is the grammar an issue here, but there are no points awarded because the comments made are so obvious that their is no real analysis undertaken.
Further issues with this essay are that the comparison is not of sufficient length. All the points made in the comparison towards the end of the essay are extremely valuable and are very good observations of difference and similarities between the two killings, but more should be said - it feels very compact and not so for the sake of the reader. It's briefly mentioned and then the essay ends. The comparison will hold as many potential marks as the descriptions, so candidate must exercise a balance in descriptions and comparisons.
As a final note, there should be a conclusion here. Conclusions aren't meant to be anything spectacular, and should not introduce any new information that would otherwise be commented on in the main bulk of the analysis, so a few lines joining together and consolidating the ideas explored in the above paragraphs is more than satisfactory, but as this candidate has not included a conclusion, their essay loses marks for structure and planning, meaning it is of a low C grade standard.

The Quality of Written Communication (QWC) is below average. There are moments that suggests this candidate has clearly not read their answer thoroughly for silly mistakes. One glaring error is that, at the end of the essay, they mistake Candy for Curley, meaning that their point becomes ambiguous as the two characters are nothing alike and Curley certainly never cared for Candy's dog. Other issues include the needless inclusion of an exclamation mark. Candidates need to understand that exclamation marks are NOT supposed to be featured in analytical essay unless they are part of a quote from sourced material. They do not create any sort of strong emotion at all and instead just look silly and juvenile. Candidates should also avoid them because they are in fact emotive punctuation points but analytical essays should not be emotive - they must be objective. There are also a few typing errors that see the candidate mistake commas for full stops and vice versa, and miss the punctuation out all together. Candidates at A Level should not have this level of difficulty with their QWC. It is simply not acceptable that candidates submit coursework without proof-reading it for spelling and grammatical errors.