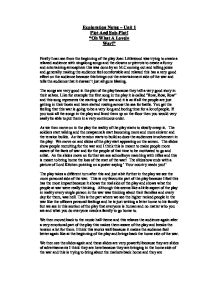 &quot;Oh What A Lovely War!&quot;

Exploration Notes - Unit 1 Plot And Sub-Plot! "Oh What A Lovely War!" Firstly I can see from the beginning of the play Joan Littlewood was trying to create a relaxed audience with singalong songs and the clowns or pierrots to create a funny and entertaining atmosphere this was done by an M.C coming out and telling jokes and generally making the audience feel comfortable and relaxed this has a very good effect on the audience because this brings out the entertainment side of the war and tells the audience that it e\wasn't just all guns blazing. The songs are very good in the plot of the play because they tell a very good story in their selves. Like for example the first song in the play it is called "Row, Row, Row" and this song represents the starting of the war and it is as if all the people are just getting in their boats and have started rowing across the sea for battle. You get the feeling that this war is going to be a very long and boring time for a lot of people. If you took all the songs in the play and lined them up on the floor then you would very easily be able to put them in a very continuous order. As we then move on in the play the reality of the play starts to slowly creep in. ...read more.

they are here because they are bringing in the home side of the war and this is trying to bring about the markets back home and they are advertising pills if you are "Run Down" suggesting that there are many people back home who are driving there selves insane back home thinking of there loved ones. The play then goes back to being very military and we hear the soldiers talking about war and what it was like in the trenches. There is a very powerful scene about all the soldiers in the trenches talking about what they are going to do and when they think the war is going to end or if it even will at all. They make jokes to each other and they are just generally trying to keep each other's morals up high. The next scene is very influential in the play because it is the section where the English soldiers hear the German soldiers singing and they start talking over the trenches and they eventually meet in the middle for Christmas day. The ends of Act One is very significant because it ends with a song of " Good bye e e e e" which shows the attitude of the soldiers and all they want to do is say goodbye and go home. The Second Act shows the political side of the play and it shows the sergeants and the home side of the war. ...read more.

This is very good because the audience would have now got used to seeing these sorts of pictures, which isn't a good thing at all. This is where a very dominant figure called General Haig he is a very different character and he has a lot of similarities between him and Hitler which suggests the position that this man is in. Haig walks around making decision that he has no clue about and this can be very effective in the scenes to come because he is just a rich man who has got the job of a General because of his wealthy position that he is in. He makes decisions that will result in a massive loss of life and when questions on the subject of death he says that a few men's death may win the war which sums up the sort of character he is. The play ends with lyrics that have a particular meaning to the whole performance. The lyrics are: " Oh, oh, oh, it's a lovely war, What do we want with eggs and ham? When we've got plums and apple jam? Form Fours, right turn How shall we spend the money we earn? Oh, oh, oh it's a lovely Oh, oh, oh it's a lovely Oh, oh, oh it's a lovely war!" These words have a deep, dark and sarcastic meaning of which, it isn't a lovely war but a war of devastation and great loss of life and this play is trying to tell this to the people of today. ...read more.