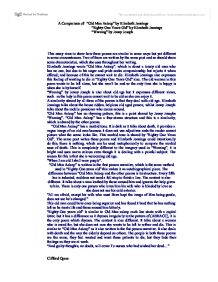 This essay aims to show how three poems are similar in some ways but yet different in some circumstances. Two of them are written by the same poet and so should share some characteristics, which she uses throughout her writing. Elizabeth Jennings wrote "Old Man Asleep", which is about a lonely old man who has no one, but due to his anger and pride seeks companionship but rejects it when offered; and because of this he cannot wait to die. Elizabeth Jennings also expresses this feeling of wanting to die in "Eighty One Years Old" also. The old woman in this poem wants to be left alone, but she won't be and so the only time she is happy is when she is by herself. "Warning" by Jenny Joseph is also about old age but it expresses different views, such as the lady in this poem cannot wait to be old so she can enjoy it. A similarity shared by all three of the poems is that they deal with old age. ...read more.

"All are afraid, except his wife who must Have kept the image of Him being gentle, does not see he's changed." This old man could have once being superior and has found it hard that he has nothing left so he treats life and those around him bitterly. "Eighty-One years old" is similar to Old Man asleep each line starts with a capital letter, but it has a difference as it rhymes irregularly to the pattern of (ABBACC), it is the only poem which rhymes. The content is also different. It talks about a woman who is cared for, but she does not care she wants to be left to wither and die. This is similar to "Old Man Asleep" as it also written in the fist person narrative. It also deals with death and the way the elderly depend on others. The people in both these poems are the same, they feel wasted and want these patients to die, but they hide their feelings as they are at work. ...read more.

She assertively suggests what she is going to do. "I shall go out in my slippers in the rain". A difference to the other poems is that it is written child like. A child uses long sentences and regularly repeats itself to get its point across. This is shown in the poem as there is a lot of repetition of "And" and "shall". " And I shall spend my pension on brandy and summer gloves..." I enjoyed reading all three poems as it gave a insight into the life of an elderly person, the poets deal with the same topic but they have a different view towards it. Elizabeth Jennings poems have more similarities, than differences compared to Jenny Josephs. This is because even though they are different poems they are written by the same poet and so will share some attributes. I believe these are good poems as they share the same theme old age, I have shown similarities and difference, which show the likeness of these poems, but how they are different especially with their views. A Comparison of: "Old Man Asleep" by Elizabeth Jennings "Eighty-One Years Old" by Elizabeth Jennings "Warning" by Jenny Joseph Clifford Opare ...read more.