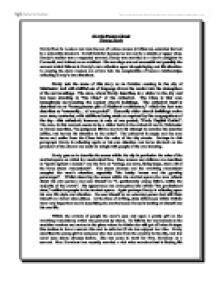 On The Western Circuit by Thomas Hardy

On The Western Circuit Thomas Hardy Hardy lived in London and was the son of a stone mason (craftsman), educated but not in a university standard. He felt inferior because he was not in a middle or upper class. Hardy's mother was a respected servant; Hardy was married to a vicar's daughter in Cornwall, and trained as an architect. His marriage was not successful and possibly the account which follows in Hardy's own reflection upon his upbringing and life situation. In reading the story readers are drawn into the complexities of human relationships, reflecting Hardy's own situations. Hardy sets the scene of this story as an October evening in the city of Melchester and with skillful use of language draws the reader into the atmosphere of the surroundings. The man, whom Hardy describes, is a visitor to the city and has been standing in "the Close" of the cathedral. The Close is that area immediately surrounding the ancient church buildings. The cathedral itself is described as an "homogeneous pile of Medieval architecture," which the foot note describes as "unusually... of one period". Generally older church buildings evolve over many centuries, with additions being made as required by the congregations of the day-this cathedral, however, is only of one period, "Early English Gothic". The man, in this account, seems to be a visitor both to the cathedral and to Melchester as Hardy describes, "he postponed till the morrow his attempt to examine the deserted edifice, and turned his attention to the noise". ...read more.

Hardy describes how Anna had received the letter from the postman but, that she had to take it to her mistress out of great difficulty and ask her to read it to her. The story continues to explain to how Edith Harnham wrote the letters for Anna, as though Anna herself was writing them. Replies came from Charles Bradford whom Hardy now introduces as Raye. The deceit of letters to and fro continues for a number of weeks. Mrs. Harnham suggests that at least Anna puts (signs) her own name on the letter, but Anna refuses to do this and says "I think I should do it so bad. He'd be ashamed of me, and never see me again". Within this paragraph of the account perhaps we are reading about the complexities of Hardy's own life style. Whether these events actually happened to Hardy and his wife we do not know, but again Hardy seems to be wrestling with his conscience. On one occasion when Anna was away from Mrs. Harnham's house a letter arrived from Raye, and Mrs. Harnham replied to this letter directly in this letter, Hardy quotes, "Edith had replied on her own responsibility, from the depths of her own heart, without waiting for her maids collaboration". The "luxury of writing to him would be known to no consciousness but his was great, and she had indulged herself therein". ...read more.

Even in the observation of the young Anna, Charles is depicted as an honest man. It is only later in the story when he has the letters supposedly from Anna delivered to a false postal address that any deceit is seen to unfold within his character. In describing Anna's enjoyment in the Fair Hardy is seeking to portray a young innocent girl. The fact that she has come from the country to work in the city of Melchester underlines this. Perhaps with this innocence Hardy adds a certain degree of support in the readers mind for Anna. In contrast Hardy's description of the rich Edith is one of a scheming young woman. However even here Hardy seeks to evoke some sympathy for Edith, as we see here as a rich but lonely woman. As the story unfolds a question upper most in the readers mind must be "What will happen to Edith Harnham, at the end of the story?" The interests of the setting; in a skillful description of the cathedral in it's deserted grandeur, the activities of the market square and the crushing of the crowds are skillfully used by Hardy to set the scene. The fact that we can see by the description which is outlined by Hardy describing the steam powered machinery in the fair takes us back to a different age. Even the description within Edith's house being one of man servants and maid servants relays the setting of a previous generation. ...read more.