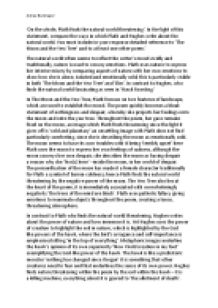 On the whole, Plath finds the natural world threatening. In the light of this statement, compare the ways in which Plath and Hughes write about the natural world. You must include in your response detailed reference to The Moon and the Yew Tree and to

The moon seems to have its own troubles with it being ?terribly upset? here Plath uses the moon to express her own feelings of sadness, although the moon conveys her own despair, she describes the moon as having despair a reason why she ?live[s] here? ?inside the moon, in her world of despair. The personification of the moon has made it a female character traditionally for Plath a symbol of barren coldness; hence Plath finds the natural world threatening by the negative power of the moon. The Yew Tree also lies at the heart of the poem, it is immediately associated with overwhelmingly negativity ?the trees of the mind are black?. Plath uses pathetic fallacy giving emotions to inanimate objects throughout the poem, creating a tense, threatening atmosphere. ...read more.

Hughes finds nature threatening within the poem by the evil within the hawk ? it is a killing machine, everything about it is geared to ?the allotment of death?. Ultimately, what Hughes presents is an accumulation of onomatopoeic and metaphoric images that may cause the reader to fear the bird, which finally may persuade the reader to see nothing other than an immense specimen of nature. Similar to Plath who in ?Elm? writes the poem from the Elms perspective, Hughes adopts the persona of a hawk, effectively showing us the world from the birds prospective. However in contrast to Plath who uses Elm to show an image of femininity, Hughes uses the masculine hawk as a very powerful image, who is threatening because of the evil things it does. ...read more.