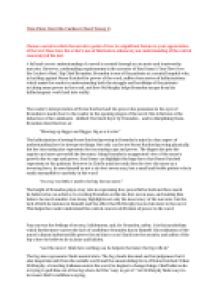 'One Flew Over the Cuckoo's Nest' - Higher question - Narration

﻿?One Flew Over the Cuckoo?s Nest? Essay 2: Choose a novel in which the narrative point of view is a significant feature in your appreciation of the text. Show how the writer?s use of this feature enhances your understanding of the central concern(s) of the text. A full and correct understanding of a novel is created through an accurate and trustworthy narrator. However, confounding requirements is the narrator of Ken Kesey?s ?One Flew Over the Cuckoo?s Nest?, Big Chief Bromden. Bromden is one of the patients at a mental hospital who, in battling against Nurse Ratched for power of the ward, suffers from series of hallucinations which assist the reader in understanding both the struggle and hardships of the patients in taking some power in the ward, and how McMurphy helps Bromden escape from his hallucinogenic world and into reality. The reader?s interpretation of Nurse Ratched and the power she possesses in the eyes of Bromden is made clear to the reader in the opening stages of the novel. ...read more.

This helps the reader understand the central concern of division of power in the ward. Fog conveys the feelings of secrecy, hiddenness, and, for Bromden, safety. It is this symbolism which furthermore carries the lack of confidence Bromden has in himself. His realisation of the nurse?s almost indestructible power forces him to crawl back into the security and safety of the fog where he believes he is alone and hidden. ?And the more I think how nothing can be helped, the faster the fog rolls in? The fog also represents Chiefs mental state. The fog clouds his mind and his judgement but it also keeps him safe from the outside world and the emasculating force of Nurse Ratched. When McMurphy, a brawling Irishman enters the ward, he begins to change things. Chief believes he is trying to pull him out of the fog where he?ll be ?easy to get at?. Yet McMurphy finds ways to increase Chief?s confidence saying; ?It appears to me you?ve grown 10 inches? Because the Chief sees size symbolising power, McMurphy?s involvement in detracting him from the fog and saying the Chief has gained height allows him to grow in confidence. ...read more.

?combine? ?a hatch of identical insects? The combine symbolises the conformist ideas, the Big Brother state, that destroyed Chiefs family. Nurse Racthed represents all the 1950?s ideas of conformity and repression. This puts her in direct conflict with McMurphy who himself represents the liberal ideas of the 1960?s. This causes a power struggle between the two, which Big Nurse is determined to win. Due to her need for all control, the reader views her as ruthless and cannot feel any sympathy for her when her control over the men begins to slip. The use of Bromden?s hallucinogenic nature in which he envisages Nurse Ratched?s hospital as a machine where she is the driving force and power helps emphasise the central concern of power stuggle in the ward. Ken Kesey?s use of an unreliable narrator in the novel is a clever mechanism to help the reader gain a broader understanding of the characters and the central concerns of the text. Using Bromden?s hallucinations as a tool to highlight the development of characters and plot, the reader can gain a greater appreciation of the text and the theme?s which surround it. Word Count: 1012 ...read more.