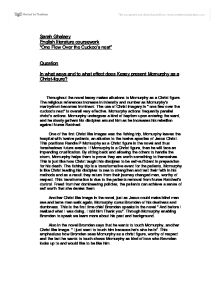 &quot;One Flew Over the Cuckoo's nest&quot; - In what ways and to what effect does Kesey present Mcmurphy as a Christ-figure?

Sarah Ghalaey English literature coursework "One Flew Over the Cuckoo's nest" Question In what ways and to what effect does Kesey present Mcmurphy as a Christ-figure? Throughout the novel kesey makes allusions to Mcmurphy as a Christ figure. The religious references increase in intensity and number as Mcmurphy's martrydrom becomes imminent. The use of Christ imagery in " one flew over the cuckoo's nest" is overall very effective. Mcmurphy actions frequently parallel christ's actions. Mcmurphy undergoes a kind of baptism upon entering the ward, and he slowly gathers his disciples around him as he increases his rebellion against Nurse Ratched. One of the first Christ like images was the fishing trip, Mcmurphy leaves the hospital with twelve patients, an allusion to the twelve apostles of Jesus Christ. This positions Randle P Mcmurphy as a Christ figure in the novel and thus foreshadows future events. If Mcmurphy is a Christ figure, then he will face an impending cruxification. By sitting back and allowing the others to handle the storm, Mcmurphy helps them to prove they are worth something to themselves. This is just like how Christ taught his disciples to be self-sufficient in preparation for his death. ...read more.

A switch snaps the clasps on his wrists, ankles, clamping him to the shadow". When the graphite salve is put on his temples and he is told that it is the conductant, he says " Anonitest my head with conductant. Do I get a crown of thorns?" This is a direct reference to the cruxification and reinforces his image as a christ figure in the novel. Mcmurphy becomes a martyr when he refuses to accomadate to Nurse Ratched's demands for an apology. Mcmurphy gains power and authority through receiving the electroshock treatment, just as crucifixion and resurrection demonstrated the holiness of jesus in Christian teachings. Kesey, however combines religious symbolim with s****l themes. Mcmurphy claims that the electroshock treatment increases his s****l potency when he comments his next request will "light up like a pinball machine". Kesey also illustrates this theme through his comment that Nurse Ratched is suggesting castration instead of a lobotomy. The religious parallels and increasingly martyrdom are the only reason why Nurse Ratched returns Mcmurphy to the ward. His reputation can grow while Mcmurphy is away, that is why Ratched returns him to the ward so she can reinforce the idea that he is not a godlike martyr. ...read more.

The result of the fight, however is the final dehumanization of Nurse Ratched. When she returns to the ward, she is unable to speak and thus has a lost a major sign of humanity. This parallels with Chief Bromden, who in course of the novel regains his voice and his humanity. Mcmurphy loses his battle against Nurse Ratched whens he orders a lobotomy for him, but the victory is hollow, she loses control of the ward as the other patients free themselves of her control and voluntarily leave the hospital. This fits in with the religious aspect of the novel; although Mcmurphy dies for his cause, his disciples leave the hospital to live according to his teachings. They gain the strength and the freedom to make independent choices that Mcmurphy anticipated. Chief Bromden best demonstrates this, through the course of the novel he has regained his voice, and he makes the final step towards self-realization at the end of the novel. By moving the control panel, Chief Bromden fulfils Mcmurphy's wishes and reasserts himself as a member of society. I think that kesey has successfully and very effectively shown Mcmurphy as a Christ figure in the novel and I feel that he has used the religious imagery to full effect. ...read more.