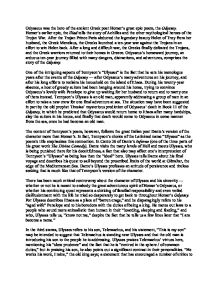 Odysseus was the hero of the ancient Greek poet Homer's great epic poem, the Odyssey. Homer's earlier epic, the Iliad tells the story of Achilles and the other mythological heroes of the Trojan War. After the Trojan Prince Paris abducted the legendary beauty Helen of Troy from her husband, the Greek Menelaus, the Greeks launched a ten-year war against the Trojans in an effort to win Helen back. After a long and difficult war, the Greeks finally defeated the Trojans, and the Greek warriors returned to their homes in Greece. Odysseus's homeward journey, an arduous ten-year journey filled with many dangers, distractions, and adventures, comprises the story of the Odyssey. One of the intriguing aspects of Tennyson's "Ulysses" is the fact that he sets his monologue years after the events of the Odyssey - after Odysseus's many adventures on his journey, and after his long efforts to reclaim his household on the island of Ithaca. During his twenty-year absence, a host of greedy suitors had been hanging around his home, trying to convince Odysseus's lovely wife Penelope to give up waiting for her husband to return and to marry one of them instead. Tennyson's Ulysses is an old man, apparently addressing a group of men in an effort to raise a new crew for one final adventure at sea. The situation may have been suggested in part by the old prophet Tiresias' mysterious prediction of Odysseus' death in Book 11 of the ...read more.

Ulysses praises Telemachus' virtues here, mentioning his "slow prudence" and the fact that he is "centred in the sphere / of common duties," but in praising his son, he also points out a significant contrast in their personalities. "He works his work, I mine," the old king says; a statement that has encouraged a number of critics to read a tone of irony into this "praise" of his son. In Ulysses' description of him, Telemachus is not, after all, the kind of man Ulysses himself strives to be. Readers who are familiar with Homer may remember the great lengths to which Telemachus went in the Odyssey in both searching for his father and in protecting his father's home from the suitors. Recalling these details may encourage the interpretation that Ulysses undervalues his son, as his brief mention of Penelope as "an aged wife" undervalues the great lengths that Penelope underwent in fending off scores of suitors and in remaining loyal to her husband in the twenty years that he was absent from Ithaca. Tennyson began composing "Ulysses" in 1833, immediately following the shocking and sudden death of his closest friend, Arthur Henry Hallam. In the ten years following Hallam's death, Tennyson worked on a grand elegy for his friend, a series of many short poems lamenting his friend's death that he eventually published in 1850 as InMemoriam A. ...read more.

not we are intended to see his will to live and his desire for adventure as honorable qualities, or rather to see that his wish for escape and for constant stimulation indicates a resistance to accept the idea of his own death. There may be another way to interpret the theme of death in the poem. Tennyson's Ulysses does seem to be preoccupied with his own mortality in such statements as "Life piled on life / Were all too little, and of one to me / Little remains," and in how he looks to every hour as an opportunity to evade death, saying that "every hour is saved / From that eternal silence, something more, / A bringer of new things." Ulysses also brings up the issue of death when he says, "Death closes all: but something ere the end, / Some work of noble note, may yet be done." Is Ulysses obsessed with dying, is he merely trying to get the most out of life, or is he looking for a final opportunity to garner a bit more fame before it is too late? Is he the great and noble hero of Homer's epic, or the deceitful Ulysses of Dante, shirking his responsibilities to a loyal family and kingdom? The brilliance of this poem, as readers throughout the years have continued to discover, lies in its many possibilities for interpretation and in the many differing messages a reader may take from it. ...read more.