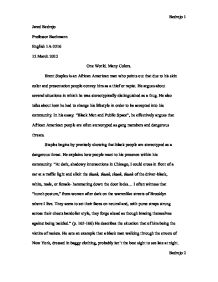 One World. Many Colors. Brent Staples is an African American man who points out that due to his skin color and presentation people convey him as a thief or r****t. He argues about several situations in which he was stereotypically distinguished a

Bedrejo 1 Jared Bedrejo Professor Bachmann English 1A-3316 12 March 2012 One World. Many Colors. Brent Staples is an African American man who points out that due to his skin color and presentation people convey him as a thief or r****t. He argues about several situations in which he was stereotypically distinguished as a thug. He also talks about how he had to change his lifestyle in order to be accepted into his community. In his essay. "Black Men and Public Space", he effectively argues that African American people are often stereotyped as gang members and dangerous threats. Staples begins by precisely showing that black people are stereotyped as a dangerous threat. He explains how people react to his presence within his community. "At dark, shadowy intersections in Chicago, I could cross in front of a car at a traffic light and elicit the thunk, thunk, thunk, thunk of the driver-black, white, male, or female- hammering down the door locks... I often witness that "hunch posture," from women after dark on the warrenlike streets of Brooklyn where I live. ...read more.

She immediately stereotyped them as threats and protected herself. Staples continues with his stereotyping issue as he explains a situation he experienced when he was in Chicago. "When I worked as a journalist in Chicago, one day, rushing into the office of a magazine I was writing for with a deadline story in hand, I was mistaken for a burglar. The office manager called security... I had no way of proving who I was. I could only move briskly toward the company of someone who knew me. (167) Here we see prejudice upon Staples due to his skin color. Even at his own work place he was distinguished as a threat. This is probably due to how he presented himself. In "Crash" we find Jean and Rick Cabot back at their home arguing about their theft situation. Due to Jean's paranoia they ended up changing the locks on their doors to ensure protection. The man changing their locks, Daniel, played by Michael Pena, was portrayed as a Thuggish Hispanic man. Jean didn't disagree with this portrayal. ...read more.

and suspect that it could possibly be the vehicle of the thiefs. Approaching the window, officer John notices that the owners of the car were black. He asked them to step out of the vehicle then searched their bodies. Being a black couple in a vehicle with a history of being stolen makes the jobs of the police a lot easier due to stereotypes. Cameron was pretty cooperative and listened to what the cops were telling him to do and saved him and his wife from getting into trouble. Ultimately, Staples remained strong through all the stereotypes he had to put up with. He focuses on changing the way he dresses and presents himself to the Bedrejo 4 people in order for them to look at him more respectfully. He finally ends saying, "Virtually everybody seems to sense that a mugger wouldn't be warbling bright, sunny selections from Vivaldi's Four Seasons. It is my equivalent of the cowbell that hikers wear when they know they are in bear country. " Cofer experienced parts of his life that were very inappropriate and unnecessary. Due to this, it leads him to act like a white person. Him acting like a white person thus causes him to fit into his community a lot better. ...read more.