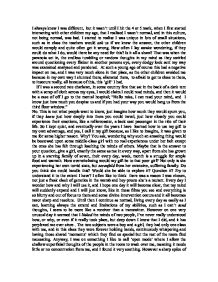 I always knew I was different, but it wasn't until I hit the 4 or 5 mark, when I first started interacting with other children my age, that I realised I wasn't normal, and in this culture, not being normal, was bad. I started to realise I was unique in lots of small situations, such as in class the teachers would ask us if we knew the answer, the other children would comply and quite often get it wrong. How often I lay awake wondering, if they could do what I do, would there be any need for this? Is it all a sham? That was when the paranoia set in, the endless tumbling or random thoughts in my mind as they swirled around questioning every flicker in another persons eye, every dodgy look sent my way was examined analysed and pondered. At such a young age of course this had a negative impact on me, and I was very much alone in that place, as the other children avoided me because in my own way I shunned them, alienated them, to afraid to get to close to them, to insecure really, all because of this, this 'gift' I had. ...read more.

The two subjects were a boy and a girl, they had only one class with me, and in this class they were forever holding hands, continuously whispering and having those shared 'moments' which they find so special but the rest of the room find nauseating. Anyway, I was on something I like to call 'open mode' where I allow the shallow superficial thoughts of the people in the room to wash over me, meaning it needs little or no concentration from me, and I found it very soothing. However a sharp spike of emotion punctured the noise, which in a metaphorical sense is very much like screaming into a noisy room, everything went silent as my gift zoomed in on this one particular mind. It turned out to be the boy, who was sat at the back with this girl, his arm casually slung across the back of her chair, his face lit up with easy laughter, but his thoughts were like dirt, they had an aura of a bad smell which left me nauseated. As it turned out the boy was sleeping with his girlfriends so called best friend and my god did he revel in it! ...read more.

I was sat talking on my phone, my frozen hands clutching the small thing to my ear and my entire body shook continuously to warm itself up. We were talking about mindless girl stuff if I remember, she was telling me about some show she had been watching, and oh it was so exciting and I just had to see it, well me being an ice block I just murmured back an unintelligible response. Suddenly she stopped her babbling and started tutting and sighing theatrically. 'I honestly don't know who writes all this, but it's all lies anyway.' Being quite used to her vague tangents I inquired further, 'Well these b****y Politicians' came back her heated answer, 'They just get someone else to write their speeches and cart out the same old promises year after year, and how much of it is ever actually put into practice? None' However I had stopped listening to her, because this was what I had been waiting for, babbling excitedly into the phone I apologised profusely to her and promised to call her back later. No longer cold from my excitement I keyed in my parents home number from memory, almost falling over in my tension as it rang. 'Hello?' My Dad. Breathless I gabbled into the phone 'Dad, I want to be a Politician.' ?? ?? ?? ?? ...read more.