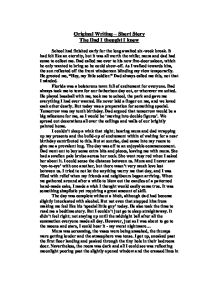 Original Writing - The Dad I thought I knew.

Original Writing - Short Story The Dad I thought I knew School had finished early for the long awaited six-week break. It had felt like an eternity, but it was all worth the while; mum and dad had come to collect me. Dad called me over to his new five-door saloon, which he only wanted to bring so he could show-off. As I walked towards him, the sun reflected off the front windscreen blinding my view temporarily. He greeted me, "Hey, my little soldier." Dad always called me this, not that I minded. Florida was a boisterous town full of excitement for everyone. Dad always took me to town for our father/son day out, or wherever we suited. He played baseball with me, took me to school, the park and gave me everything I had ever wanted. He never laid a finger on me, and we loved each other dearly. But today was a preparation for something special. Tomorrow was my tenth birthday. Dad argued that tomorrow would be a big milestone for me, as I would be 'moving into double figures'. We spread out decorations all over the ceilings and walls of our brightly painted home. I couldn't sleep a wink that night; hearing mum and dad wrapping up my presents and the build-up of excitement within of waiting for a near birthday contributed to this. ...read more.

Although this was a short-term joy, I never forgot the trauma we went through especially as I was so young at the time. I've had to live with the physical and mental scars, which will never heal for the rest of my life. Mum isn't fully better, but that doesn't matter, as long as we have each other, mum and me, the hero and I. 'The Tempest' assignment " 'The Tempest' explores both political and magical power. What do you think Shakespeare was trying to say to his audience about how people use their power?" Focus on a minimum of four characters. In 'The Tempest', there are many magical elements, both political and mystical, and the main structure of the play revolves around the 'art' of Prospero. He is the rightful Duke of Milan, though his brother Antonio usurped his kingdom and title. Prospero was able to survive a plot on his life, and he and his daughter Miranda were set aboard a wrecked craft, but managed to land safely on the island. Prospero is able to gain control of the spirits of the island, and uses his vast knowledge and control over the spirits to direct acts of magic as he pleases. The whole sequences of events revolve around the tempest caused by Prospero. ...read more.

If thy greatness will Revenge it on him... Thou shalt be lord of it, and I'll serve thee... I'll yield thee asleep, Where thou mayst knock a nail into his head" (III. 2.48-57) However, like Trinculo, he is not cunning, and is completely incapable of carrying out the plan. They are foolish to take advantage of Caliban's kindness and begin abusing his trust in them. Shakespeare wants us to see that we shouldn't always trust the people around us, because they may easily try to take advantage of us. Caliban hopes to get away from his duties to Prospero and doesn't think about what may lie ahead. This also relates to the idea of 'utopia', living in a world free from monarchs, armies and everything else, in order to live life free from the abuse of other people's power. Shakespeare wrote 'The Tempest' with specific purpose. Shakespeare sounds as him he is describing Prospero as himself bidding farewell to his art as a playwright. 'The Tempest' is commenting upon politics in seventeenth - century Europe and the criticism of colonialism. Shakespeare had many ideas about the idea of magic in his play and he probably didn't have a single purpose in his mind as it is stated in the book The Tempest. Like all of Shakespeare's plays, 'The Tempest' gives the audience an opportunity to discover the hidden depths of the symbolic play and the magic within it. Simon Farid 10W. ...read more.