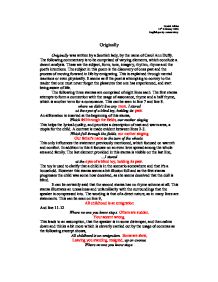 Daniel Atkins 15th February 2003 English poetry commentary Originally Originally was written by a Scottish lady, by the name of Carol Ann Duffy. The following commentary is to be comprised of varying elements, which conclude a decent analysis. These are the subject, form, tone, imagery, rhythm, rhyme and the poet's intentions. The subject in this poem is the discovery of ones past and the process of moving forward in life by emigrating. This is explained through mental reactions or even physically. It seems as if the poet is attempting to convey to the reader that one must never forget the pleasures that one has experienced, and start being aware of life. The following three stanzas are comprised of eight lines each. The first stanza attempts to form a connection with the usage of assonance, rhyme and a half rhyme, which is another term for a consonance. This can be seen in line 7 and line 8. where we didn't live any more. ...read more.

This stanza illustrates an uneasiness and unfamiliarity with the surroundings that the speaker is compressed into. The wording is that of a direct nature, as in many lines are statements. This can be seen on line 9, All childhood is an emigration And line 11-12 Where no one you know stays. Others are sudden. Your accent wrong. This leads to an assumption, that the speaker is in some distemper, and then calms down and thinks a bit more which is cleverly carried out by the usage of commas as the following excerpt shows, All childhood is an emigration. Some are slow, Leaving you standing, resigned, up an avenue Where no one you know stays. The second stanza illustrates an acceptation of emigration. The first 3 lines of the second stanza show one side to emigration and the remaining lines show another version to the whole idea. Compared to the first stanza, the speaker has come to terms with the travelling and mentality ideas, behind moving very often. ...read more.

A type "alien" image is perceived through the outlines life. Yet contradicting the previous statement, the speaker has come to terms that it is only natural to feel like an outcast, which is like a snake shedding its skin, in that it is only natural. The usage of "only" adds to a feeling of longing or missing something, which is held dear to the speaker's heart. In a sense this poem is unique to others, in that the first two stanzas focus on fitting in and belonging to something, whereas the third stanza seems not able to keep this, identity crisis theme afloat. The poem seeks to convey the poet's deep and personal feelings, which she may have experienced when she was younger. Emigration is a common thing now a day for the modern youth, and each person has a different way of handling it. Overall this poem is about moving from a secure warm environment, that one calls home, to that of a different surrounding, by which the speaker treated it as emotional mine field. WORD COUNT: 885 ...read more.