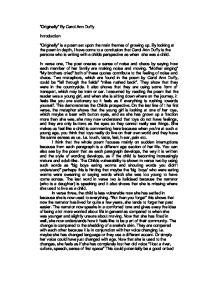 "Originally" By Carol Ann Duffy Introduction "Originally" is a poem set upon the main themes of growing up. By looking at the poem in depth, I have come to a conclusion that Carol Ann Duffy is the persona who is writing with a childs perspective as when she was a child. In verse one, The poet creates a sense of noise and chaos by saying how each member of her family are making noise and moving. "Mother singing" "My brothers cried" both of these quotes contribute to the feeling of noise and chaos. Two metaphors, which are found in the poem by Carol Ann Duffy, could be "fell through the fields" "miles rushed back". They show that they were in the countryside. It also shows that they are using some form of transport, which may be train or car. I assumed by reading the poem that the reader was a young girl, and when she is sitting down where on the journey, it feels like you are stationary so it feels as if everything is rushing towards yourself. ...read more.

The Childs vulnerability is shown in verse two by using such words as "big boys eating worms and shouting words you didn't understand" perhaps this is hinting that maybe the 'big boys' who were eating worms were swearing or saying words which she was too young to have come across. The last word in verse two is italicised because the narrator (who is a daughter) is speaking and it also shows that she is missing where she used to live as a child. In verse three, the child is less vulnerable now she has settled in because she is now used to everything. "But then you forget" this shows that now the narrator has lived for quite a few years, she tends to forget her past easier. The narrator now speaks in a comforted tone and gives away the idea of being a lot more worried about life in general as compared to when she was younger and slightly unsure about moving. Now that she has fitted in well, she now understands how it feels like to be part of their community. ...read more.

The setting in the poem is created by the feelings shown by the young girl. "Fell through the fields" This shows that they used to live in the country side, but they moved to a rural area where flats and estates can be found "Pebble-dashed estates" So maybe the girl is unsure of the area when she realises that where she is moving to is a lot more busy and lively. The use of 3 verses is a very good idea for several reasons. For one, it defines the maturing of her age, which is put across using methods such as different tones of voice, and more complex metaphors and sentences. The whole poem could be mapped out as journey. The first verse demonstrates the beginning of her life and when the family move. Second verse indicating the actual journey, and the becoming older stage, whilst trying to get used to moving. With the last verse when she has settled in her new area, and it has a quote on the last line which demonstrates her socialising with her friends, and seems to have fitted in really well. By Scott Stoneham ...read more.