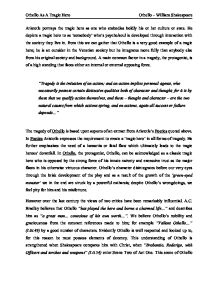 Aristotle portrays the tragic hero as one who embodies boldly his or her culture or state. He depicts a tragic hero to as 'somebody' who's psyche/soul is developed through interaction with the society they live in. from this we can gather that Othello is a very good example of a tragic hero; he is an outsider in the Venetian society but he integrates more fully than anybody else from his original society and background. A main common factor in a tragedy, the protagonist, is of a high standing that faces either an internal or external opposing force. "Tragedy is the imitation of an action; and an action implies personal agents, who necessarily possess certain distinctive qualities both of character and thought; for it is by these that we qualify action themselves, and these - thought and character - are the two natural causes from which actions spring, and on actions, again all success or failure depends..." The tragedy of Othello is based upon aspects of an extract from Aristotle's Poetics quoted above. In Poetics Aristotle expresses the requirement to create a 'tragic hero' in all forms of tragedy. He further emphasizes the need of a hamartia or fatal flaw which ultimately leads to the tragic heroes' downfall. In Othello, the protagonist, Othello, can be acknowledged as a classic tragic hero who is opposed by the strong force of his innate naivety and excessive trust as the major flaws in his otherwise virtuous character. ...read more.

There is a fair amount of assumptions concerning the probability and realism expressed by Othello. This suggests that because of the seeming unlikelihood of events in the play, it is not a feature of a tragedy and Othello cannot be considered as a tragic hero. However this observation is brought by how rapidly the plot develops. Some readers/audiences may see this as a weakness in the actual work, but it just clearly shows Shakespeare's literary ability to work in another aspect of the definition of the 'tragic hero' by Aristotle. "If you string together a set of speeches expressive of character, and well finished in point of diction and thought, you will produce the essential tragic effect nearly so well as with a play which, however deficient in these respects, yet has a plot and artistically constructed incidents. Now character determines men's qualities, but it is by their actions that they are happy or the reverse." The extract above is also from Poetics written by Aristotle. Here Aristotle tries to convey that essence the real meaning of the tragedy lies not in the characterization, but the actions of the tragic hero. Hence Shakespeare felt it unnecessary to complicate things with useless information which wouldn't be expected from the heart of tragedy. Although Shakespeare does not waste any time transforming Othello the virtuous protagonist doubtfully into an insane murder, but we need to remember that he is up against the most ingenious villain. ...read more.

In Othello's last speech, it seems like he separates himself from the flaw responsible for his deeds and seems to kill it. "Set you down this. And say besides that in Aleppo once, where a malignant and turbaned Turk beat a Venetian and traduced the state, I took by th' throat the circumcised dog and smote him thus." We're quite moved in Othello's ironic speech when he reveals before he commits suicide, "Speak of one that loved not wisely, but too well, of one not easily jealous but, being wrought, perplexed in an extreme..." Here Othello truly realizes that he has a tragic flaw and that is his naivety and lacking of wisdom. And as a main characteristic of a tragedy, the hero, Othello, realizes this really late and he dies leaving the reader/audience saddened by the events forming the tragedy. Othello is another casualty of the strong force of hamartia as defined by Aristotle, he's seen as a way through which Shakespeare can boast about his genius as a playwright. This play Othello captivates the reader/audience using such concepts like hamartia to arouse strong feelings in them, causing them to feel sympathetic for the protagonist. The fact that the excessiveness of a good quality such as 'trust' could have such a devastating effect on a man of esteem, and respect as portrayed by Othello enhances Shakespeare's capability to communicate with the reader/audience on a very personal level because the events of the human characteristic, e.g. Othello's naivety, are so fathomable. ...read more.