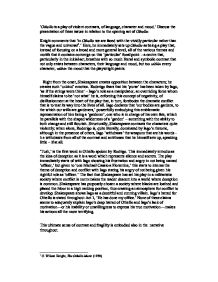 Othello is a play of violent contrasts.

'Othello is a play of violent contrasts, of language, character and mood.' Discuss the presentation of these issues in relation to the opening act of Othello. Knight comments that 'in Othello we are faced with the vividly particular rather than the vague and universal1.' Here, he immediately sets up Othello as being a play that, instead of focusing on a broad and more general level, all of the various themes and motifs that it contains converge on this 'particular' focal point - a centre that, particularly in the initial act, breathes with so much literal and symbolic contrast that not only exists between characters, their language and mood, but too within every character, within the mood that the playwright paints. ...read more.

Iago declares that 'our bodies are gardens, to the which our wills are gardeners,' powerfully embodying this emblematic representation of him being a 'gardener', one who is in charge of his own fate, which he parallels with the shaped wilderness of a 'garden' - something with the ability to both change and still flourish. Structurally, Shakespeare contrasts the characters quite violently; when alone, Roderigo is, quite literally, dominated by Iago's rhetoric, although in the presence of others, Iago 'withdraws' the weapons that are his words - h e withdraws from all of the contrast and antitheses that he himself sets up, speaking little - if at all. ...read more.

The fact that Shakespeare has set his play in a militaristic society where conflict is norm makes the reader descent into a world where deception is common. Shakespeare has purposely chosen a society where blacks are loathed and placed the Moor in a high ranking position, thus creating an atmosphere for conflict to develop. Shakespeare shows Iago as a deceitful and cunning villain. Iago's hatred for Othello is stated throughout Act 1, 'He has done my office.' None of these claims seems to adequately explain Iago's deep hatred of Othello and Iago's lack of motivation-or his inability or unwillingness to express his true motivation-makes his actions all the more terrifying. This ultimate sense of contrast and fragility is embodied also in the narrative throughout. 1 G. Wilson Knight, The Othello Music (1930) ?? ?? ?? ?? ...read more.