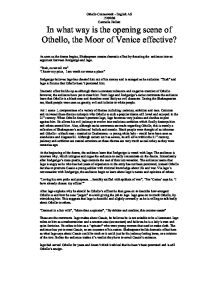 In what way is the opening scene of Othello, the Moor of Venice effective? As soon as the drama begins, Shakespeare creates dramatic effect by thrusting the audience into an argument between Rodgerigo and Iago. "Tush, never tell me" "I know my price, I am worth no worse a place" Rodgerigo believes Iago has cheated him out of his money and is enraged as he exclaims: "Tush" and Iago is furious that Othello hasn't promoted him. Dramatic effect builds up as although there is constant reference and negative mention of Othello however, the audience have yet to meet him. From Iago and Rodgerigo's r****t comments the audience learn that Othello is a black man and therefore most likely an evil character. During the Shakespearian era, black people were seen as greedy, evil and inferior to white people. Act 1 scene 1, compromises of a variety of themes including: jealousy, ambition and race. Common and universal these themes underpin why Othello is such a popular drama still loved and enjoyed in the 21st century. When Othello doesn't promote Iago, Iago becomes very jealous and decides to plot against him. He allows his evil jealousy to evolve into malicious ambition which finally destroys him and others around him. Also, although r****t comments are made regarding Othello, this is merely a reflection of Shakespeare's audiences' beliefs and morale. ...read more.

Before the audience makes it's verdict they have to await Cassio's entrance. Iago had served Othello for years and doesn't think it ethical that he hasn't been promoted and is still Othello's ensign. "Must be lee'd and calmed" "And I, God bless the mark, his Moorship's ancient" This nautical metaphor expresses Iago's feelings. When a ship is "lee'd and calmed" the wind has been taken out of its sails and the ship remains stationary and stuck in his role as an ancient (flag bearer) Iago then goes on to be sarcastic by referring to Othello as " his Moorship". This is a pun as it refers to Othello's race and position; a Moor is an African descent and "his worship" is a term of respect for someone in Othello's position. As the drama progresses, the audience learns that Rodgerigo is a simple, easy, foolish man. His short impulsive comments in comparison to Iago's long structured speeches indicate who is in control. "I follow him to serve my turn upon" "Keep yet their hearts attending on themselves ... and when they have lined their coats do themselves homage ... These fellows have some soul and such a one do I profess myself" "I am not what I am" To an extent, their conversation is somewhat like a soliloquy as through speech Iago exposes his deceitful personality whilst Rodgerigo listens and later still allows himself to be manipulated by him. ...read more.

He then goes on to assume that his daughter has had a spell put on her and has been taken advantage of as she is so young and innocent. "Is there not charms by which the property of youth and maid hood may be abused" Brabantio's prejudice clouds his outlook s much that he doesn't even stop to think that his daughter could genuinely be in love with Othello. He then sends his people out accompanied with Rodgerigo to look for Othello and Desdemona. During Act 1 Scene 1, we learn that Iago has gone back to Othello to act "loyal" and we're left in suspense to what will happen when Brabantio finds his daughter and Othello. This leaves the scene with a cliff-hanger which makes it very effective. During the build up to this, we learn about many characters via their actions and speeches: Iago is deceitful, manipulative and hypocritical, Rodgerigo is a na�ve push-over in love with Desdemona and Brabantio is Desdemona's protective father. We indirectly learn about Othello, however, we need to take into account that we learn about Othello from different racists: this builds dramatic effect and we are eager to meet Othello. As the audience, we feel that we've been partly exposed to these characters and their plans but we now want to learn more about these realistic characters and watch how they evolve within the drama. ?? ?? ?? ?? Othello Coursework - English AS 15/09/08 Carmella Hollett ...read more.