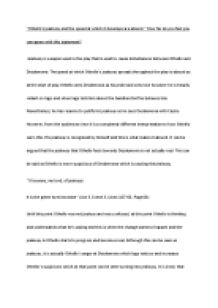 Othellos jealousy and the speed at which it develops are absurd. How far do you feel you can agree with this statement?

﻿?Othello?s jealousy and the speed at which it develops are absurd.?? How far do you feel you can agree with this statement? Jealousy is weapon used in the play that is used to cause disturbances between Othello and Desdemona. The speed at which Othello?s jealousy spreads throughout the play is absurd as at the start of play Othello sees Desdemona as his pride and only love however he is heavily reliant on Iago and when Iago tells him about the handkerchief he believes him. Nevertheless, he has reasons to justify his jealousy as he sees Desdemona with Cassio. However, from the audiences view it is a completely different interpretation to how Othello see?s this. His jealousy is recognised by himself and this is what makes it absurd. It can be argued that the jealousy that Othello feels towards Desdemona is not actually real. This can be said as Othello is more suspicious of Desdemona which is causing the jealousy. ??O beware, my lord, of jealousy: It is the green eyed monster?? (Act 3, Scene 3, Lines: 167-68, Page 66) Until this point Othello was not jealous and was confused, at this point Othello is thinking and understands what he?s saying and this is when the change starts to happen and the jealousy in Othello starts to progress and becomes real. Although this can be seen as jealousy, it is actually Othello?s anger at Desdemona which Iago notices and increases Othello?s suspicions which at that point can be seen turning into jealousy. ...read more.

Othello here uses the word "once" in both the sense of "as soon as" and in the sense of "finally." He means that as soon as he is in doubt he will resolve that doubt once and for all. At first Othello was seen as a cautious character and the audience would interpret him as more annoyed than jealous. Iago presents Othello with ?real? evidence that suggests that there is a relationship between Cassio and Desdemona,which Iago does by offering many ?proofs? to Othello, most of which are created through deceitful means. There are weak points in Othello that make him think negative because of the influences around him and can create distances between him and Desdemona. However, this helps Iago to create true jealousy in a simple man such as Othello. ??Haply, for I am black and have not those soft parts of conversation That chamberers have, or for I am declined Into the vale of years,?yet that's not much? She's gone. I am abused; and my relief must be to loathe her?? (Act 3, Scene 3, Lines: 265-70, Page: 70-71) This quotation suggests that Othello comes up with reasons why Desdemona might cheat on him; he comes up with reasons such as race. He thinks that because he is black Desdemona may decide to betray him and implies that she is cheating on him with a white man. ...read more.

The cunningness of Iago is also something absurd as Othello is portrayed as a character that is clever yet Iago?s twisting of words can be seen as a barrier between Othello being able to see the real Iago. This can be seen as Iago feigning reluctance to speak in Act 3 Scene 3 can justify Othello for not doubting Iago, as when Iago is showing his feelings as so strongly by acting reluctant there should be no reason for Othello to doubt Iago. In conclusion, Othello?s jealousy and the speed at which it develops is absurd to an extent that his jealousy developed throughout the first acts of the drama gradually, as before Act 3 Scene 3, more than his jealousy being real it was just the character of Othello doubting Desdemona which was lead by Iago. However, his jealousy for Desdemona was justified even though it was a feeling that should have been avoided by the character of Othello as it shows his love for her in an absurd way. Othello?s tragic downfall can be seen as the trust that he has in Iago. When Iago tells Othello that Desdemona has already deceived her father, his doubts on Desdemona start to become clearer and the jealousy develops at an absurd speed. The speed of the jealousy can be seen as absurd because there are points in the drama when Othello doubts himself. He tries to clear the jealousy yet he fails at doing this because of Iago being a barrier, therefore sometimes his jealousy becomes more and sometimes it is less. Word Count: 1578 ...read more.