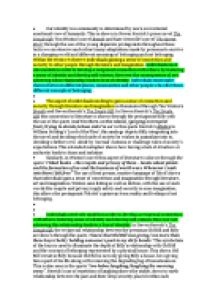 Our identity in a community is determined by ones own internal emotional view of humanity. This is shown in Steven Herricks prose novel The Simple Gift, Tim Wintons novel Breath and Kate Grenvilles novel The Secret River

﻿1. Our identity in a community is determined by one?s own internal emotional view of humanity. This is shown in Steven Herrick?s prose novel The Simple Gift, Tim Winton?s novel Breath and Kate Grenville?s novel ?The Secret River? through the use of the young disparate protagonists throughout these texts we can observe and extract many adaptations made by personas to survive in a changing world and different meanings of belonging and not belonging. Within the texts we observe individuals gaining a sense of connection and security to other people through literature and imagination. Individuals need role models in order to develop a reciprocal connection with others, by fostering a sense of identity and develop self-esteem. However the consequences of not achieving t2his relationship leads to loss of identity. Individuals must make choices between different places, communities and other people who offer them different concepts of belonging. . 2. 3. The aspect of individuals needing to gain a sense of connection and security through literature and imagination is illuminated through Tim Winton?s Breath and Steven Herrick?s The Simple Gift. ...read more.

keys I held./ holding someone?s past in my dirty hands.? This symbolism of the keys is used to illuminate the depth of Billy?s relationship with Old Bill and the concept of belonging represented by a physical house. This shows Old Bill?s trust in Billy because Old Bill is not only giving Billy a house, he is giving him a part of his life along with removing the degrading tag of homelessness. This is also seen in the quote ?two hobos laughing/laughing the morning away?, Herrick?s use of repetition of laughing shows the stable, down to earth relationship between the pair and their deep security placed within each other. The hyperbole of ?laughing the morning away? as well as the colloquial language of ?hobos? enlightens the reader to admire the mindset of the homeless protagonists. 8. Similarly, this is shown through the protagonist featured in Breath, Pikelet, after his mentor Sando abandons him. ?I went numb. I couldn?t say what it was and didn?t dare try. ...read more.

Similar shown in the extract of Kate Grenville?s ?The Secret River? through the convict protagonist William Thornhill with the quote ?For them, Home was nothing but a story. If they were to go to London they would be outsiders?, this metaphor illuminates the choice he must make to uproot his family back to England, even though they have develop a connection to a physical place, it shows they want Australia to be like London. Capital of Home emphasises the significants .The repetition of home throughout the extract is used. Also shown by the hyperbole in ?Had often been on the wrong side of the wall? alluding to the wrong side of society, it is also seen as it relates to prison society, feeling trapped and isolated, just like in Australia. In conclusion both the composers have identified that belonging within a community is determined by ones childhood and background and the role of parental figures and role models, this is achieved through the use of adolescent protagonists as well as relating connection a to literature, enabling individuals to escape to another reality, the composer also highlight the need for role models and belonging in communities to enhance ones sense of humanity. ...read more.