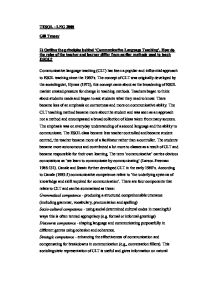 Outline the principles behind 'Communicative Language Teaching'. How do the roles of the teacher and learner differ from earlier methods used to teach ESOL?

TESOL - LNG 3008 Gill Tansey 2) Outline the principles behind 'Communicative Language Teaching'. How do the roles of the teacher and learner differ from earlier methods used to teach ESOL? Communicative language teaching (CLT) has been a popular and influential approach to ESOL teaching since the 1960's. The concept of CLT was originally developed by the sociolinguist, Hymes (1972), this concept came about as the broadening of ESOL market created pressure for change in teaching methods. Teachers began to think about students needs and began to ask students what they need to know. There became less of an emphasis on correctness and more on communicative ability. The CLT teaching method became more about the student and was seen as an approach not a method and encompassed a broad collection of ideas taken from many sources. The emphasis was on everyday understanding of a second language and the ability to communicate. The ESOL class became less teacher controlled and became student centred, the teacher became more of a facilitator rather than a controller. The students became more autonomous and contributed a lot more to classes as a result of CLT and became responsible for their own learning. The term 'communicative' carries obvious connotations as 'we learn to communicate by communicating' (Larson-Freeman 1986:131). Canale and Swain further developed CLT in the early 1980's. According to Canale (1983:5) communicative competence refers to 'the underlying systems of knowledge and skill required for communication'. ...read more.

The students are given word lists that translate from the target language to English, these were not necessarily useful words therefore the students were not using language that they would in every day life, unlike CLT. Other classroom tasks included translating full texts into target language, again not specific every day useful language. Within this teaching method writing, reading, speaking and listening were ignored which does not help the student in their learning of a second language, nor does it help them converse. They learn more tenses and grammatical terms taught through their first language rather than conversational language. Accuracy was emphasised within The Grammar Translation Method and learners were assessed using formal written exams. As the method comes from a very educational background it focused more on mental disciplines rather than a more natural, relaxed teaching method such as CLT. The learners that were first taught by Grammar Translation Method were well-educated learners of a second language. Grammar Translation Method only taught function and not form which was unusual and useless, as every form has a function. Students along with teachers lose interest being taught, and teaching in this way, as it is a very monotonous form of TESOL teaching. This method was used as a main teaching method for a very long time, but eventually the method went out of favour with teachers. Towards the mid 19th Century Europeans travelled around more and needed oral proficiency therefore learners and teachers began to look for another method of teaching and this ultimately lead to the reform movement. ...read more.

British linguists in particular attempted to refine the content of the language that was taught by trying to anticipate the situations that learners might encounter, therefore making the language useful in everyday life. This research enabled TESOL syllabuses to focus on the vocabulary and structures, which learners were most likely to need and these could be repeated frequently in class. A strength of this approach is its effort to use exact methods to identify items for inclusion in the syllabus that would be relevant and motivating for learners. A weakness is the difficulty in identifying the situations that were useful for learners, and in describing the language these situations contained, as language is far more unpredictable than this. Current theory and research as encouraged a trend towards mixing these methods, this has been called 'the post method condition' (Kumaravadivelu 1994) it implies a renewed focus on the teachers role. Because learning a foreign language may be the biggest, most complex and most difficult task any learner will undertake and it combines the learning of vocabulary and language rules with the skill of developing a fluent application of these things. Learning a second language is very different from any other subject in the curriculum whether inside or outside school. Communicative Language Theory, in comparison to the earlier methods of teaching seems to be the most successful one, although this all may change if linguists decide there is need for change, as we are still far from fully understanding the process of learning in the TEFL classroom. ...read more.