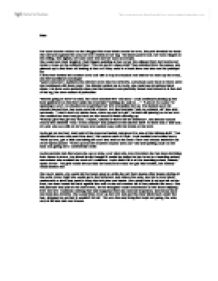 Pain. Her eyes became watery as she dragged the razor blade across her arm, the pain invaded her body.

Pain Her eyes became watery as she dragged the razor blade across her arm, the pain invaded her body. She sat back against the wall, her arm rested on her leg. The blood poured out, her eyes clinged on the ceiling. She sighed, her eyes were red and her soul was empty. She could here their laughter, their fingers pointing at her as her tray slipped from her hands and made a mess on the cafeteria floor. "You are such a dopey idiot" they shouted from the queue, she glanced up to find them all looking at her as if they were in a freak show and she was the principal act. A lady from behind the counter came out with a mop and bucket and told her to clean up the mess, she felt humiliated and stupid. ...read more.

Her lips trembled "just an accident, sir" she said nervously. "I don't want cry babies here, clean up your act girl", he said still pinning on to her arm. She nodded her head and got back on her knees to finish cleaning up. "Nobody give this girl any food, I repeat, nobody or there will be detention", the director looked around the cafeteria "And I mean nobody" and pointed at the kitchen staff. He then took a last look at Layla who was still on her knees and walked away with his hands on his back. Layla got on her feet, took hold of the mop and bucket and gave it to one of the kitchen staff. "You should take more care next time love", the women said at Layla. Layla nodded and walked away. ...read more.

Every night she would go to the bathroom and relieve the pain, she hid a razor blade underneath a small box used to keep the hair pins and bands. She would take it out and sit on the floor, her head would fall back against the wall as she cut another bit of her pathetic life away. She felt pleasure and pain at the same time, all her thoughts would concentrate on the blood dripping from her arm. Suddenly nothing that had happened that day seemed important, she leaned back and took slow breaths. She would then cover up her arm and put the razor blade back under the box, strapped on so that it wouldn't fall off. This was the only thing that kept her going, the only way of life she had ever known. ...read more.