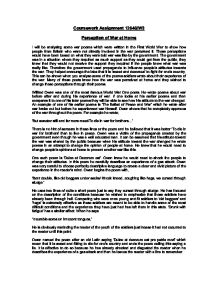 Perception of War at Home

Coursework Assignment 12640/W3 Perception of War at Home I will be analysing some war poems which were written in the First World War to show how people from Britain who were not directly involved in the war perceived it. These perceptions would have been based on what they were told war was like by the government. The government was in a situation where they required as much support as they could get from the public, they knew that they would not receive the support they required if the people knew what war was really like. Therefore the government used propaganda to influence people's attitudes towards the war. They helped encourage the idea that it is 'sweet and decorous' to fight for one's country. This can be shown when you analyse some of the poems soldiers wrote about their experience of the war. Many of these poets knew how the war was perceived at home and they wished to change these perceptions through their poems. Wilfred Owen was one of the most famous World War One poets. He wrote poems about war before after and during his experience of war. ...read more.

Comparing who were once young and fit soldiers to 'old beggars' and 'hags' is extremely effective as these soldiers are meant to be able to handle some of the most difficult conditions and the experience they have just had has left them in this state. 'Drunk with fatigue' has a similar affect. When he says 'Incurable sores on innocent tongues,' He is obviously reminding the reader of the youth of the soldiers just incase it had not occurred to the reader until this point. Owen named the poem after an old Latin saying 'Dulce et decorum est pro patria mori' which mean that it is sweet and fitting to die for one's country and ends the poem calling this saying a lie. It is effective to do so because he has already shocked and disgusted the reader when he describes the experience of a gas attack and then he leaves the reader with a line to remember. Siegfried Sassoon was another famous world war one poet who had his own experience of the war. He had similar attitudes to the war as Owen and helped Owen develop his work when they met in Craiglockhart Hospital. ...read more.

I believe that West's poem is imitating the voice of these older men but then describing what the soldiers are actually going through to show why no one in their right mind would want to do so. If this is the case then the older men of the time either saw it as an honour to be able to fight in the war, or they just used to say this to encourage the younger people to go and fight in the war because it may make them look good. All of the poems show that people at home used to have the wrong impression of the war. They believed that it was sweet, decorous and honourable to be able to fight in the war for your country and family. Most poets who experienced the war themselves may have held these views before they had this experience but most of them changed this afterwards. They then knew that what people thought at home was wrong and they wished to change these views. This is obvious from just reading the poems I have studied because you can feel the urgency of each poet to get their point across to the people. All of the tactics used are an attempt to change the opinion of the public. ...read more.