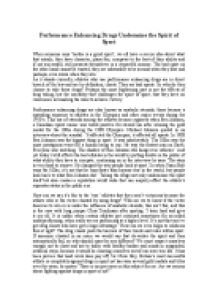 Performance Enhancing Drugs Will Undermine The Spirit of Sport

﻿Performance Enhancing Drugs Undermine the Spirit of Sport When someone says ?he/she is a good sport?, we all have a secure idea about what that entails, they have character, plays fair, competes to the best of their ability and if not successful, still presents themselves in a respectful manner. The bad sport on the other hand cannot be trusted, they are unbearable to be around when they lose and perhaps, even worse when they win. As it stands currently, athletes who use performance enhancing drugs are in direct breach of the law and are by definition, cheats. They are bad sports. So why do they choose to take these drugs? Perhaps the most frightening part is not the effects of drug taking, but the mentality that challenges the spirit of sport, that they have no conscience in breaking the rules to achieve victory. Performance enhancing drugs are also known as anabolic steroids, these became a spreading exposure to athletes in the Olympics and other major events during the 1950?s. ...read more.

It is unfair when certain athletes get criticised sometimes for so-called underperforming, when really we are performing at a higher level. It?s just that you?ve got drug cheats who have got a huge advantage.? How can we even begin to condemn this at right? The drug cheats push the barriers of their limits and rules within sport. If someone cheated in an exam we would say that de-writes the spirit and then automatically fail, so why should sport be any different? We must respect ourselves enough not to cheat and not to tinker with healthy bodies and minds in misguided, artificial ways, because it would be cheating ourselves out of our own true life. It has been proven that hard work does pay off, Sir Chris Hoy, Britain?s most successful athlete is completely against drugs in sport yet has won several gold medals and titles over the years, he quotes ?There is no grey area on this subject for me. ...read more.

His charity, Livestrong also suffered. The publicity of Armstrong?s un-sportsmanship scandal put his charity into danger, Lance recently stepped down as chairman of Livestrong saying in an interview that ?it?s been a difficult couple of weeks?, his sponsors like Nike have also decided to end their partnership with Lance due to the embarrassment he has created for not only himself, but anyone who was a part of his success. To say performance enhancing drugs do not undermine the spirit of sport is slander. There is a reason to why there are severe punishments that can be life-changing. If we genuinely and deeply value the respect for rules, laws, others, and ourselves, we must respect the ruled when we play sports. We must have enough respect for others to protect fairness in every form of commerce with them. The mentality that these athletes posses is horrific, that they think they are better and higher than the sport itself, it is a privilege to be able to participate in sport. Performance enhancing drugs take what is fair and what is right and twist it into something that is deemed unforgivable. Holly Gordon ...read more.