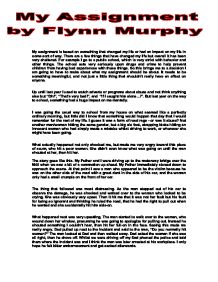 [image001.gif] My assignment is based on something that changed my life or had an impact on my life in some sort of way. There are a few things that have changed my life but overall it has been very sheltered. For example I go to a public school, which is very strict with behavior and other things. The school acts very seriously upon drugs and crime to help prevent children from having bad experiences with these things. So this brings me to a decision I am going to have to make about what my assignment should be about. It needs to be something meaningful, and not just a little thing that shouldn't really have an effect on anyone. Up until last year I used to watch adverts or programs about abuse and not think anything else but "Oh!", "That's very bad!", and "if I caught him alone...!". ...read more.

My Father immediately slowed down to approach the scene. At that point I saw a man who appeared to be the victim because he was on the other side of the road with a great dent in the side of his car, and the woman only had a small crumple on the front of her car. The thing that followed was most distressing. As the man stepped out of his car to observe the damage, he was shocked and walked over to the woman who looked to be crying. She was obviously very upset. Then it hit me that it was not her fault but his fault for being so ignorant and thinking he ruled the road, that he had the right to pull out when he wanted and she accidentally hit him side-on. What happened next was very upsetting. The man started to walk over to the woman, who wound down her window, presuming he was going to apologize for pulling out. ...read more.

In my mind this raised a big question. What was this? Simple road rage, or a case of some bully hitting a weaker person? If I looked at the situation with two human beings (no gender mentioned), then I would see someone getting angry and losing his temper toward another person. But if I look at it in the way it really happened, I see two cars, a man and a (physically) weaker woman. In the modern world, we are taught that men should not hit women because they are not as strong as us, so it is seen as a form of bullying. Weirdly, this does not apply to this man, but wait he isn't above the law is he, he just thinks he is. However, he is not and that is why he was arrested. Well, that is the most disturbing thing that has happened to me in my life and has changed it as well. Now, when I watch programs or adverts I relate back to the incident and feel even more strongly about not hitting someone weaker than myself. The End [image004.gif] [image005.gif] ...read more.