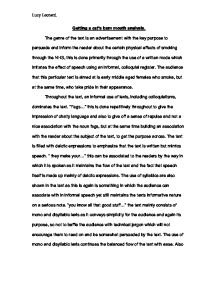 Getting a cat's b*m mouth analysis. The genre of the text is an advertisement with the key purpose to persuade and inform the reader about the certain physical effects of smoking through the NHS, this is done primarily through the use of a written mode which imitates the effect of speech using an informal, colloquial register. The audience that this particular text is aimed at is early middle aged females who smoke, but at the same time, who take pride in their appearance. Throughout the text, an informal use of lexis, including colloquialisms, dominates the text. "f**s..." this is done repetitively throughout to give the impression of chatty language and also to give off a sense of repulse and not a nice association with the noun f**s, but at the same time building an association with the reader about the subject of the text, to get the purpose across. ...read more.

Also the text includes numerous contractions to maintain the informal register of the text and the chatty context. "That's..." the contraction implies this colloquial language and maintains the flow it also makes the text more accessible for the audience as it is simple and to the point but continues to carry its informative and persuasive nature. Furthermore, the text contains some complicated lexis also which comes across ironic, "pretty horrible..." this oxymoron identifies the two contrasts between the audience who take pride in appearance and the effects that smoking will have on them if they continue this is shown by the two contrasts by using the adjectives pretty and horrible to describe the effects to the audience. What is more to emphasize the text as mimicking speech, the publisher presents a rhetorical question specifically targeted at the audience. " You know all that good stuff..?" ...read more.

"They're just plain ugly." The article ends with a minor sentence to give the final impact to leave the reader with that final declarative to keep them thinking about the article. The graphology of the article is very precise as it indicates that it is aimed directly at women as a photograph of a women smoking covers most of the page. It also shows the actual effects on that particular woman this adds reliability to the article in order to show to the audience that it does actually occur and it is not a pretty site. It also gives information of how to get help to maintain the articles seriousness and show that it wants to help people about this particular problem. Overall, the article uses various persuasive lexis and grammar to demonstrate the effects of smoking, yet remains colloquial and accessible for the reader to understand almost giving them a choice and not forcing them to do it but at the same time emotionally describing the consequences. ?? ?? ?? ?? Lucy Leonard. ...read more.