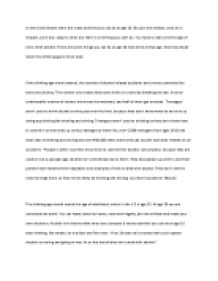 Persuasive writing- America should lower the drinking age to 18 at least.

﻿In the United States there are many activities you can do at age 18, like join the military, vote, be a stripper, p**n star, adopt a child, but there is one thing you can?t do. You have to wait until the age of 21 to drink alcohol. There are worst things you can do at age 18 than drink at that age. America should lower the drinking age to 18 at least. If the drinking age were lowered, the number of alcohol related accidents and crimes committed by teens would drop. The number one reason why teens drink is to rebel by breaking the law. ...read more.

They don?t see the need to binge drink, so they?re less likely be drinking and driving, to prevent accidents? (Baum). The drinking age should match the age of adulthood, which in the U.S is age 18. At age 18 you are considered an adult. You can leave school or home, vote work legally, join the military and make your own decisions. Alcohol isn?t that horrible when you compare it worse activities you can do at age 18 than drinking, like smoke, be a striper and p**n star. ?If an 18 year old is trusted with such a grave decision as voting and going to war, he or she should also be trusted with alcohol.? The drinking age should match other countries to be equal. ...read more.

The number of alcohol related crimes and accidents would be lower. The Drinking age should match the adulthood and other international drinking ages to at least 18. It is absolutely unfair to be able to do some activities at age 18 and not drink alcohol. Why leave the drinking age at 21? There will be more teens drinking and teen deaths if the age remains high. Screw the congress of what they think for a minute and think about for at least a second?.. Teens at age 18 are allowed to kill someone, take care of themselves, and show their n**e body?s, but they can?t even pick up a can of beer? Common that?s ridiculous. If you are allowed to kill some at age 18, you should be allowed to drink alcohol at a lower age to at least 18. ...read more.