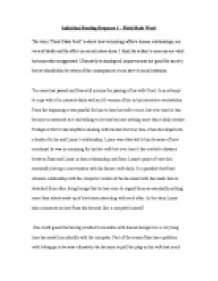 Peter Watts' story Flesh Made Ford is about how technology affects human relationships, our view of death and the effect on social interactions

﻿Individual Reading Response 2 ? Flesh Made Word The story ?Flesh Made Ford? is about how technology affects human relationships, our view of death and the effect on social interactions. I think the author?s concerns are valid but somewhat exaggerated. Ultimately technological improvements are good for society but we should also be weary of the consequences it can have to social relations. Ten years has passed and Russ still mourns the passing of his wife Carol. In an attempt to cope with it he interacts daily with an AI-version of her in his interactive workstation. From the beginning it was painful for him to hear his wife's voice, but over time he has become accustomed to it and talking to her has become nothing more than a daily routine. Perhaps at first it was helpful in dealing with his loss but over time it has developed into a burden for his and Lynne?s relationship. ...read more.

He is overwhelmed with grief regarding this decision and still to this day questions himself if he did the right choice. This has a parallel to the situation with his cat Zombie that had been run over by a car. As Russ makes the decision to put Zombie down he comments on how it's all about economics. Later it's revealed that Lynne had lied about how only Russ had the authority to make the decision to put the cat to death. She tells Russ that the reason she deceived him was so that she could see if he had any feelings left at all and by forcing Russ to deal with his cat's death, Lynne tries to get him to process the grief after his wife's death and to get him to go back to who he once was. When this fails she programs herself into the computer in an attempt to reach him, however it seems to have the opposite effect and instead Russ becomes upset with it, and encouraged by the Carol software deletes her persona from the computer and is thus ending their relationship. ...read more.

This has influenced him greatly at how he views people, as reflected in his thinking while arguing with Lynne: "How many ops/sec happening in there?" and "How many switches opening, rerouting, until some of that electricity runs down her arm and makes her hand turn the doorknob?" (Watts 9). It could be said that he thinks of life as something meaningless, which could very well be a way of handling the guilt he feels for letting his wife die, because at other times he's very distraught by death and seems to sympathize with the dying. In the end one can conclude that the computers are too limited in their ability to handle and react to sensory input to be possible as a satisfying replacement for human companionship, as evidenced by the fact that by Russ? feelings of the artificial Mosby, despite being a better conversationalist, he feels that their interaction lacks of purpose. Russ? used an artificial version of his wife to cope with her death, but in the long run it destroyed his life. ...read more.