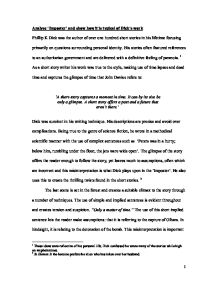 Analyse 'Imposter' and show how it is typical of d**k's work Phillip K d**k was the author of over one hundred short stories in his lifetime focusing primarily on questions surrounding personal identity. His stories often featured references to an authoritarian government and are delivered with a definitive feeling of paranoia. 1 As a short story writer his work was true to the style, making use of time lapses and dead time and captures the glimpse of time that John Davies refers to: 'A short-story captures a moment in time. It can by its size be only a glimpse. A short story offers a past and a future that aren't there.' d**k was succinct in his writing technique. His descriptions are precise and avoid over complications. Being true to the genre of science fiction, he wrote in a methodical scientific manner with the use of complex sentences such as 'Peters was in a hurry; below him, rumbling under the floor, the jets were wide open'. The glimpse of the story offers the reader enough to follow the story, yet leaves much to assumptions, often which are incorrect and this misinterpretation is what d**k plays upon in the 'Imposter'. ...read more.

The simple sentences are often used for tension such as 'Olham took a deep breath.' It concentrates on his breathing, the deep breath signifying almost a stop in time. It is somewhat ironic in the way that he is a robot and traditionally does not need to breathe. d**k is unusual in his use of dialogue he presents it more interestingly than traditional sci-fi writers. His talent to bring out the character's thoughts in speech and further the themes and questions of identity are evident. " I knew, of course, that the robot had never reached me. But I had no way of proving it. Sometimes it isn't possible to prove a thing right away. That was the whole trouble. There wasn't any way I could demonstrate that I was myself." This short extract is a fitting summary to the entire short story. It asks the question, as do many other short stories by d**k, how can you prove your identity? It is presents the theme in an eerily uneasy fashion with the repetition of the lack of proof coming across as suspicious. Although on first reading it settles the reader into a false sense of security, making the ending more rewarding through its robotic repetition. ...read more.

This combination of old and new adds realism and makes the future world more believable. Overall, d**k's stories follow the same themes of human manipulation, questioning the fabric of life and what defines free-thinking, while focusing on identity. Brunner puts it well when he writes that: 'Illusions substituting for reality crop up in virtually every book d**k has written. He is - one must say this - obsessed with the idea that a human being might be manipulated by unseen forces, and consequently exploits the ultra-humanoid robot both literally and symbolically.' The stories all end with a feeling that the robots have succeeded in their goals, taking a negative viewpoint to how humans can distinguish and establish identity. Imposter and Progeny in particular showing a common theme of the robots growing more human throughout the stories with the exact opposite happening in Human is with the character becoming dehumanize and robotic. 1 These ideas were reflective of his personal life; d**k confessed he wrote many of the stories while high on amphetamines. 2 In Human Is the heroine prefers the alien who has taken over her husband. 3 'Robots could study the child, analyze his needs, his wants, test his abilities and interests.' Progeny 'He wore a soft gray suit, a subdued necktie, French cuffs, and shiny black shoes' Human is ?? ?? ?? ?? 1 ...read more.